The myths of boozed-up Britain

Saloon bar oracles sit with their half-empty glasses and put the world to rights. The British pub has long hosted the debates which answer every question: what to do about yobs, immigrants, bankers, queues, TV repeats, noisy neighbours and the weather? On one subject, the drinker counts himself particularly expert, of course - booze.

So, if the conversation at your local tonight comes round to the latest ideas on what we should do about the problems of alcohol, I have culled a few key points from the parliamentary report on the subject published today.

"Like the myth that the English have always been drunk, the contrast between English drunkenness and civilised Mediterranean habits may also be something of a myth," the MPs report. To back up their argument, they publish a graph which compares the level of death from chronic liver disease and cirrhosis in the UK with that in France, Italy and Spain. 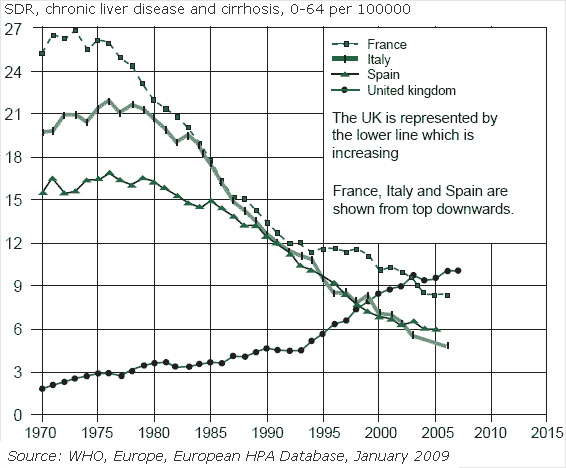 What is revealed is how relatively small a problem alcohol-related deaths were in Britain in the early seventies when viewed against the carnage in southern Europe. However, over the next three decades, the picture was transformed.

"While the wine drinking countries of Southern Europe always had historically very high levels of liver deaths from alcohol related cirrhosis, deaths in these countries have been dropping whereas UK deaths are still rising inexorably. The UK finally overtook Spain, Italy and France for liver deaths in 2004."

The committee report publishes another graph which I find equally shocking. It takes that story of rising deaths from alcohol-related liver disease and places it in the context of mortality rates for other diseases. 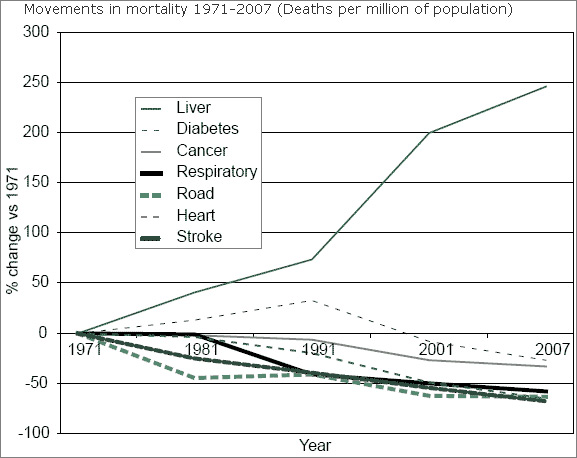 The story of alcohol in Britain has been one of what the MPs describe as a "massive increase" in the last fifty years. I have used this graph before - but it does bear repeating, I think. 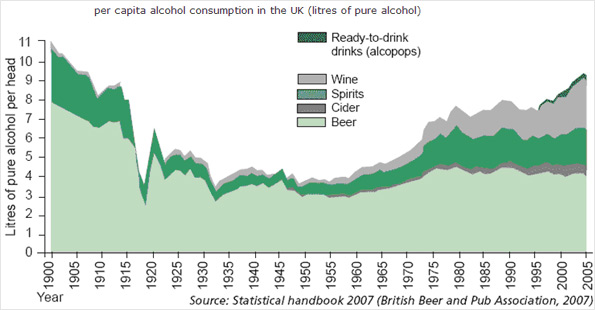 While beer consumption appears to have risen only a little, sales of wines and spirits have soared since the Second World War. One consequence has been a very significant increase in the number of people dying from drink. Today's committee report puts it this way:

"The fact that alcohol has been enjoyed by humans since the dawn of civilization has tended to obscure the fact that it is also a toxic, dependence inducing teratogenic and carcinogenic drug to which more than three million people in the UK are addicted. The ill effects of alcohol misuse affect the young and middle aged. For men aged between 16 and 55 between 10% and 27% of deaths are alcohol related, for women the figures are 6% and 15%."

What has caused us to take to the bottle in this dangerous way? Rather than simply ask health experts or politicians, the committee invites historians to try and put our change in drinking habit in context. They identify two drivers: economics and culture. 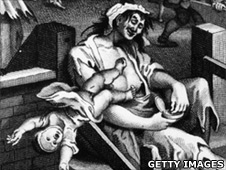 They offer evidence of how cost and access effect consumption:

"(T)he 18th-Century gin craze was linked to the government's encouragement of gin production and restriction of brandy imports; the rise in consumption in the 19th Century was associated with rising living standards."

However, that nose-dive in alcohol consumption you can see on the graph in 1914 was the result of "the most sustained attempt to come to grips with drink in British history":

"Measures included shorter opening hours, higher duties on beer, and significant reductions in both the production and strength of beer. The amount of beer consumed in 1918 was nearly half of the pre-war total, despite rising incomes, and arrests for drunkenness in England and Wales fell from 190,000 to 29,000 between 1913 and 1918."

The historians also point to important cultural effects. One observed a decline in drinking in the late 19th Century and suggested that this was due to "many counter-attractions for working-class consumers (music halls, football, cigarettes, and holidays)".

Despite the Depression, most workers saw real wages increase between the wars. However, spending on alcohol remained stable, it was argued, "because drink had many rivals now: radios and gramophones, gardening, cinema and the pools".

This argument doesn't hold true for post-war Britain, however, where there are now more potential distractions from alcohol than ever. The historians explained that drinking alcohol just became the fashionable thing to do. In the 1940s, "young people preferred milk bars and coffee bars to pubs", but booze became much more available with supermarket sales and a relaxed licensing regime. A "drinking culture" developed, particularly among students, the committee was told.

The MPs put the theory to Varsity Leisure Group, owner of the "Carnage UK" brand which, they said, had become "unfairly or otherwise, a notorious example of a promoter of nightclub events for students". The company said that its events were "based around collective identity, meeting new people and having fun", but admitted that "students are being immersed into a culture which is focussed around the culture of alcohol".

Whatever the cause, the result is a country with a significant drink problem. The figures quoted by the committee give the lie to the claim that alcohol is responsibly consumed by all but a minority.

Ten million adults drink more than the recommended limits and between them knock back 75% of all alcohol consumed in the country. More than two-and-a-half million adults (8% of men and 6% of women) drink above the higher-risk levels - more than double the government's daily guidelines.

So, if you pop into the boozer tonight and the oracle bemoans the proposal to try and outlaw cheap alcohol, you could quote today's report which says this:

"It is not inevitable that per capita alcohol consumption should be almost three times higher than it was in the middle of the 20th Century or that liver disease should continue to rise. Nor is it inevitable that at night town centres should be awash with drunks, vomit and disorder. These changes have been fuelled by cheap booze, a liberal licensing regime and massive marketing budgets."

That should get the debate flowing nicely.