We like to see the world in black and white: a landscape of villains and victims; good and evil; right and wrong.

These labels allow us to make easy moral judgements about others, to apportion blame and sympathy. It seems to be an involuntary human response. Who has suffered? Who is at fault?

Indeed, many of the stories in today's news are about the process of allocation: the Iraq War Inquiry; reports of crimes and the courts; response to the credit crunch.

We extract complexity and nuance until we have distilled events to the point where their human constituents can be placed in monochrome boxes marked "saints" and "sinners". Every narrative becomes a morality play.

Take the heart-rending story of Baby P. The toddler we now know as Peter was a tragic victim of abuse - torture which ultimately led to his death.

Those who carried out the abuse have been described as "evil". Blame was also heaped on some of the professionals involved in the case.

But what if Peter had been saved? What kind of person would he have grown up to be? We can never know, of course. But we do know that young children who suffer serious abuse are more likely to develop a personality disorder (PD) in later life.

In a recent academic paper, researchers studied 50 people with PD. Of those, 44 had experienced abuse and most of them blamed it for their problems.

The deviant and sometimes anti-social behaviour which defines PD may well result in such individuals ending up in the criminal justice system, at which point the victim becomes the villain.

Peter's mother was herself seriously abused as a child. At some point in her life, she was moved from the white box to the black.

The question about Baby P was raised by psychiatrists at a conference I attended last week. The first National Personality Disorder Congress brought together professionals, PD service users and their carers to "celebrate developments in the personality disorder field".

But for all its up-beat tone, the event forced me into uncomfortable territory, a place where moral and medical judgements are blurred and the idea of personal responsibility is tested. Where does fate end and fault begin?

Two hundred years ago, clinicians began to focus on criminals whose offences were so abhorrent that they appeared insane and yet didn't suffer from any recognised mental illness.

The term "moral insanity" was coined, a description of a condition where intellectual faculties are unimpaired but morals are deemed "depraved or perverted".

However, as early as 1874, the pioneer of psychiatry Henry Maudsley suggested that the phrase portrayed "a form of mental alienation which has so much the look of vice or crime that many people regard it as an unfounded medical invention".

We now use the term personality disorder, but the argument has not changed. Recent guidance from the National Institute of Health and Clinical Excellence (NICE) notes that: "there is considerable ambivalence among mental health professionals towards those with personality disorder.

"Some see this label as sanctioning self-indulgent and destructive behaviour, encouraging individuals to assume an 'invalid role' thereby further reducing whatever inclination they might have to take responsibility for their behaviour."

"The alternative view", NICE continues, is that people with PD "have complex health needs that ought to be identified and addressed, either within or alongside the criminal justice system".

I met dozens of people with personality disorder at last week's conference, many of whom had had dealings with the police and courts over the years. But none looked like Hannibal Lecter. 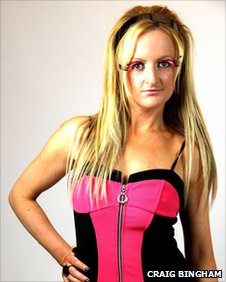 The woman pictured is Kayla Kavanagh, an Irish musician who is a regular on the festival circuit, has just completed a national tour, is working on an album and has just released her first single.

Performing at the conference she came across as charming, intelligent and talented. Kayla has also been diagnosed with Borderline Personality Disorder (BPD). She talks openly about her "destructive behaviours", the "state of mind that you just can't switch off" on a short video (which you can watch here).

BPD is described as "a disorder of emotion regulation" which "may be associated with episodes of impulsive aggression, self-injury, and drug or alcohol abuse".

Typically, people with BPD will have "highly unstable patterns of social relationships" in which attitudes towards family and friends may suddenly shift from deep love to intense hatred.

BPD and other personality disorders are classified by the World Health Organisation as "a severe disturbance in the character, logical condition and behavioural tendencies of the individual, usually involving several areas of the personality, and nearly always associated with considerable personal and social disruption".

So when Kayla lashes out or cuts herself is she a victim of her condition or a villain who should control her behaviour?

What about Andy Brooker, another delegate at the conference? Andy has been diagnosed with "severe personality disorder" and spoke about one incident in which he found himself throwing furniture out of the window of his mum's flat. The television, tables, ornaments all went flying - passers-by had to dive for cover.

When the riot police turned up with shields raised, the front-door opened to reveal a man naked to the waist with his chest dripping with blood from self-inflicted slash marks.
Victim or villain? Although he says he was at this stage entirely passive, officers put him in a strangle-hold and were verbally aggressive towards him. 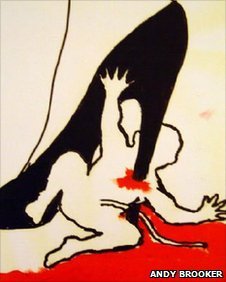 Andy, incidentally, is also highly respected as an advisor to government and the NHS on personality disorder, a director of the charity Emergence and a practising artist having had exhibitions at the Tate Modern and other galleries.

Such people do not easily fit into black and white boxes. Instead, they present us with disconcerting questions about free will and self-determination. Should we pity them or punish them? Treat them or imprison them?

The rule of thumb for most people, I suspect, is whether such people are capable of controlling their behaviour. But what does capable mean? A woman whose drink problem causes her to neglect her child is likely to be regarded as a villain.

A woman whose depression has the same result might well be seen as a victim. And yet alcohol abuse and depression may be different sides of the same coin, both perhaps triggered by some historic trauma.

People with PD will say that when they behave in a deviant way, it is prompted by something inside them that they cannot control. We all "lose it" sometimes, a display of temper, unkindness, self-loathing or self-centredness which we bitterly regret later. "I wasn't myself", we might say.

It seems to me that personality disorder sufferers "lose it" more often and more intensely - sometimes with devastating consequences for themselves or others.

The head of the Department of Health's Personality Disorder Programme, Nick Benefield, produced this slide to give an idea of the range and scale of PD in England. 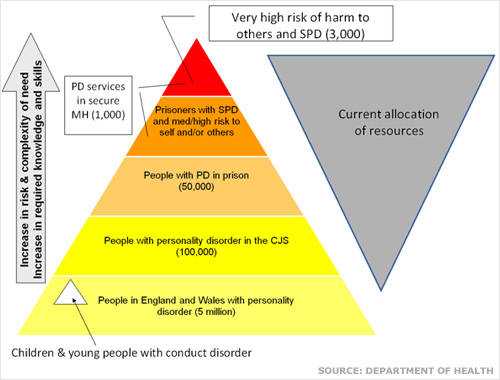 Included in his definition are more than five million people. It is likely, therefore, that everyone reading this post will either be a sufferer of PD or will know someone who is.

One piece of UK research suggests that up to 13% of the general population, 25% of GP consultations in deprived urban areas, most people in prisons, at least half of homeless people and between a third and two thirds of inpatients in psychiatric hospitals have diagnosable PD.

Officials generally work on a figure of about 4% who would benefit from help - roughly two and a half million people in Britain.

If you want to see whether your own characteristics would potentially lead to a diagnosis for PD, there are online assessment tools here and here.

I sometimes wonder whether these very broad definitions help or hinder. There is such a difference between a violent psychopath and someone with mild obsessive-compulsive PD that there must be a risk that attitudes to the former may hinder help for the latter.

A useful primer on the subject - Ten things to know about Personality Disorder explains how many clinicians and service users dislike the term because of its pejorative sense.

They also find the 10 categories of PD (defined here) unhelpful as most people with severe problems have a mixture of them, and the exact diagnosis does not help in deciding on treatments.

One of the psychiatrists I met at the conference, Dr Ian Kerr from Lanarkshire, told me in an e-mail that "the term PD MUST BE SCRAPPED" (his capitals). He argues that there are many reasons why it is unhelpful:

"[S]tigmatising, historic baggage, implication that it is something about the core or essence of an individual that is somehow 'wrong', or the confusion and overlap in forensic circles about PD and 'murderous crazed psychopaths' which has nothing to do with the majority of so-called PD sufferers."

Dr Kerr thinks it would be better to describe it as "post-complex-trauma syndrome/disorder" which gives a clue to what some experts think triggers the disorder.

The trauma might be childhood abuse or, as in the case of one PD sufferer whose family talked movingly at the conference about her suicide, it resulted perhaps from nearly choking to death on a walnut shell as a toddler.

We don't know. Research is thin. And there are some who argue that doctors' attempts to find a therapeutic label for it are in danger of simply medicalising bad behaviour.

However, we have come a long way since the term "moral insanity" was coined in the early 1800s. In January this year NICE published its guidance on how to treat both borderline and anti-social PD, official recognition that people with a diagnosis for personality disorder deserve help and can benefit from treatment.

But the dilemma remains. Not every trauma victim goes on to abuse. Not every neglected child self-harms. Society cannot easily forgive or excuse those that commit appalling crimes on the basis that it is a consequence of a troubled past.

The question is still unanswered. Where does personality end and disorder begin?