"Overall, cannabis use does not lead to major health problems." So says Professor David Nutt, the government's top adviser on drug classification, today describing suggestions that high-strength cannabis or skunk causes schizophrenia as a "scare" story. 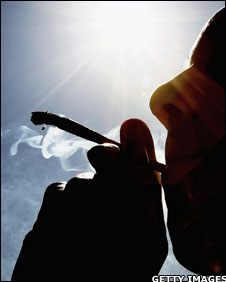 Professor Nutt, who heads the Advisory Council on the Misuse of Drugs, last year reportedly accused the former Home Secretary Jacqui Smith of being "naive" after her decision to reject scientific advice and re-classify cannabis up from class C to B. She said she had decided to "err on the side of caution", having taken account of "public perception" and "policing priorities".

The two locked horns a second time in February this year after the government again rejected the advice of the advisory council. The scientists had proposed that ecstasy be downgraded from class A with the professor suggesting that the drug caused fewer deaths than horse-riding accidents. The home secretary demanded an apology from Professor Nutt, claiming his remarks trivialised the debate.

Now, Professor Nutt has returned to the fray. In a paper published today, he warns that the decision to put cannabis back into class B may lead to more people taking the drug.

"It may be that if you move a drug up a class it has a greater cachet. People think, 'Oh, it's interesting, maybe we should be trying it because it's a class B or a class A rather than a class C.'"

The professor says the evidence that new high-strength cannabis is causing increased cases of psychosis and mental illness is "difficult to interpret", but that the council's research "estimates that, to prevent one episode of schizophrenia, we would need to stop about 5,000 men aged 20 to 25 years from ever using the drug".

Professor Nutt accepts there is a link between cannabis and mental ill-health. He cites research suggesting that "smokers of cannabis are about 2.6 times more likely to have a psychotic-like experience than non-smokers".

But he points out that "you are 20 times more likely to get lung cancer if you smoke tobacco than if you don't." In other words, he says, "(T)here is a relatively small risk for smoking cannabis and psychotic illness compared with quite a substantial risk for smoking tobacco and lung cancer".

Furthermore, the professor points to what he describes as a paradox.

"Schizophrenia seems to be disappearing (from the general population) even though cannabis use has increased markedly in the last 30 years."

"Research," he argues, "consistently and clearly showed that psychosis and schizophrenia are still on the decline. So, even though skunk has been around now for 10 years, there has been no upswing in schizophrenia."

Nevertheless, the government rejected the ACMD's recommendation that cannabis remain at class C saying that it "believes" there is "growing evidence" of a strong causal link between cannabis and schizophrenia.

The refusal to accept the expert views of a council set up to judge the relative harms of different drugs went down badly with the scientific community in general, and Professor Nutt in particular.

Today, he warns of the negative consequences of what he calls, a "highly politicised" process. It risks causing, he suggests, "great damage to the educational message" on drugs.

"If you think that scaring kids will stop them using, you're probably wrong. They are often quite knowledgeable about drugs and the internet has made access to information extremely simple. We have to tell them the truth."

The government view, though, is that they should adopt a precautionary principle. "Where there is... doubt about the potential harm that will be caused, we must err on the side of caution and protect the public," as Jacqui Smith put it last year.

Professor Nutt attacks the 'safety first' approach arguing that "it starts to distort the value of evidence and therefore I think it could, and probably does, devalue evidence".

He recalls the scare about the MMR vaccine. "People were concerned, on the basis of false science, that the triple vaccine might cause brain damage. This led to a reduction in vaccination uptake and now children are getting lung and brain damage from measles," he states. "The precautionary principle with MMR has been clearly shown to be wrong," he continues. "It has harmed more people than it has helped."

The collision between science and politics over cannabis resulted partly from a government belief that voters thought cannabis was becoming more dangerous and wanted tougher action. However, its own consultation painted a different picture. 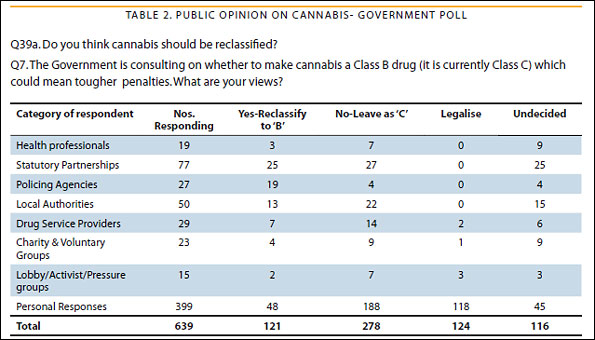 Among almost 400 responses from individuals, only 12% thought cannabis should be reclassified as class B. Forty-seven per cent suggested no change and 30% wanted it legalised. Among organisations that responded, only police agencies showed a majority in favour of a tougher stance.

Since the consultation reflected the views of a self-selecting group with a particular interest in the debate, the ACMD commissioned a general opinion poll. That found a majority of people (58%) wanted cannabis reclassified upwards BUT only a quarter (24%) thought the penalty for possession should be increased - the only effect of making the drug class B.

Professor Nutt is not arguing that cannabis is safe - far from it. A report from the ACMD, published last year, spells out that "cannabis is a harmful drug" and that "a concerted public health response is required to drastically reduce its use".

However, he is a passionate believer in the importance of scientific evidence to underpin public policy and seems determined to initiate a serious debate about the relative harms associated with illegal and legal drugs.