Nutt gets the sack

Professor David Nutt tells me the home secretary has "sacked" him from his post as chair of the Advisory Council on the Misuse of Drugs.

A letter was sent from Alan Johnson this afternoon shortly after my revelation that it was planned to dismiss him early next week.

Although the home secretary's letter says he is asking his adviser to step down with immediate effect, the professor insists he is being given no option.

Here is the home secretary's letter in full: 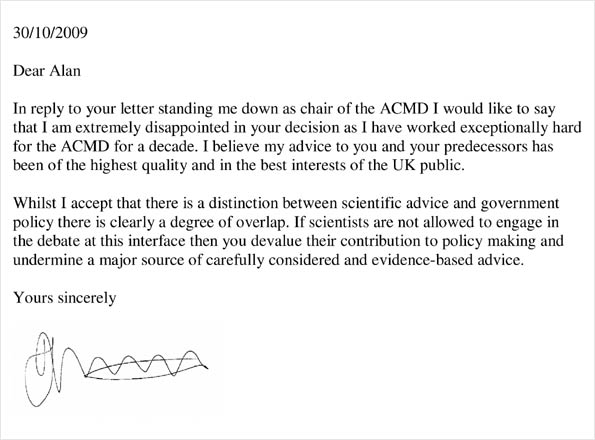 I understand that senior figures within the scientific and academic community are already looking to rally behind Professor Nutt, whose response to the home secretary suggests that he is happy to become a "poster-boy" for science as a contributor to policy-making.

We are witnessing a collision between science and politics (see my earlier post, Science v Politics?). There may be significant fall-out.

When the Advisory Council on the Misuse of Drugs was set up in 1971, home office ministers told Parliament it was there to provide "the key advice" on what Class A drug should be and to ensure that policy is "evidence-based".

But what if the minister doesn't like the evidence?

Twice in the last year or so - once with cannabis and again with ecstasy - the government ignored its experts because of "public perception" and because of what former Home Secretary Jacqui Smith last night described as the "need to send out a message".

It is an argument that was roundly criticised by Parliament's Science and Technology Committee a few years ago. The MPs stated:

"The government's desire to use the class of a particular drug to send out a signal to potential users or dealers does not sit comfortably with the claim that the primary objective of the classification system is to categorise drugs according to the comparative harm associated with their misuse."

It is supporting this argument that has cost Professor Nutt his job today. He does not accept that there is much evidence to show that the class of a drug acts as a deterrent and therefore sees the only point of classification as being "to provide the public with an evidence-based and rigorous appraisal of relative harms".

But to suggest that taking ecstasy is less dangerous than horse-riding, or that cannabis is safer than alcohol and tobacco - however true that may be - is to say the unsayable in the political drugs debate.