Map of the Week: London without the Thames

If you live in a city, the river is more than a landmark, more than something to help get one's bearings or a line to cross - it defines the space.

One's geographical, cultural and even social compass is guided by the slow and steady sweep of a river's path through a conurbation.

To the ancient Pharaohs of Egypt, the East Bank of the Nile was the side of life, the West, where the sun set, the side marked out for death and the journey to the afterlife.

In Paris, the Rive Droite is associated with elegance and sophistication, unlike the dangerously bohemian Rive Gauche.

In London? Well, ask any taxi driver and they'll explain how the capital is really two separate cities - "norf" and "sarf", a division which no number of bridges and tunnels can ever unify.

So the idea that graphic simplicity should dictate the river be removed from the iconic tube map of London is controversial to say the least.

No consultation, no political debate, no opportunity for protest; Old Father Thames has been airbrushed out of existence like some Soviet refusenik.

He recognised that it wasn't the physical location of the stations that mattered, but their relationship to each other.

However, his first map in 1931 and every one since, has given readers one geographical feature to cling on to - the River Thames.

Its shape too has been adapted into the schematic format, but the river provides a physical frame around which the network is placed.

A quick look at other underground transport maps from Britain and around the world reveals that almost all include a river for people to get their bearings.

In Glasgow, the "Clockwork Orange" is bisected by the Clyde. 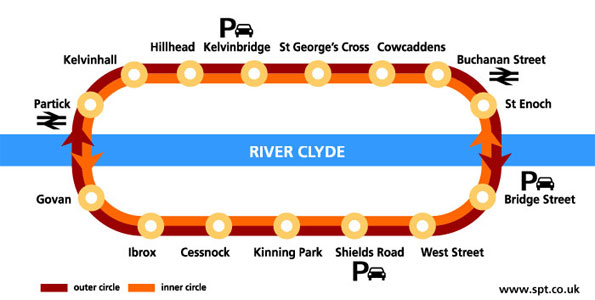 From Moscow comes a cartographic tribute to Beck which, to my mind, lacks the elegance of his original, but the River Moscow is a vital component.

The South Koreans find their way around Seoul with the aid of a bewilderingly detailed and colourful map of the subway. Its design is almost hypnotic, the concession to reality is the Hangang (Han River) snaking its way through the chaos.

The only example I could find of a tube map which does not include a river comes from Tokyo[563KB PDF]. This, I would contend, is what happens when graphics forgets about geography.

London's tube map is so much more than a metropolitan guide to transport links - it is a work of art recognised and copied around the world.

Disposing of the River Thames from London is like removing the smile from the Mona Lisa.

PS: A correspondent has sent me detailed lists of underground maps WITH and WITHOUT rivers. I am grateful to Mark Ovenden, author of Metro Maps of the World, for this vital information.

Major systems with no rivers included: