Once again we are warned that that great British icon "the corner shop" is an endangered species.

Cue tutting and head-shaking from those who see it as further evidence that giant corporate retail monsters are gobbling up the small, the local and the personal; another nail in the coffin of community, already laid out in its funeral casket following the loss of the local pub and the sub post office. 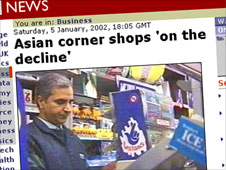 I am not so sure. Indeed, I wonder whether our towns and cities are actually fizzing with the "open all hours" culture of the corner shop. There may be something to cheer in this hardy perennial of a story.

The survival of the little newsagent and grocer is often testament to the determination and sheer hard work of immigrants and refugees determined to make it in Britain. If the traditional Asian-run store is disappearing, it is arguably a sign of successful community integration rather than community decline.

When Ugandan Asians were forced to flee from Idi Amin's "ethnic cleansing" in the early 1970s, around 30,000 made their way to Britain. Penniless but often experienced in commerce, many of them set up as shop-keepers, hoping that would provide a foothold in the business community.

The expansion of Pakistani and Indian communities in parts of England during the sixties and seventies also saw Asian families take over failing or empty corner shops. It was a living, just, and it meant that immigrants could avoid some of the racism and discrimination prevalent in other industries. Self-employment was the key.

These businesses usually made no money - marginal enterprises which could only compete with the expanding supermarkets by being handy.

Figures compiled in 1982 show that the Asian shop-keepers worked longer and were open longer than their white counterparts. They were also highly qualified - one in five of the Asian shop-owners had a degree. 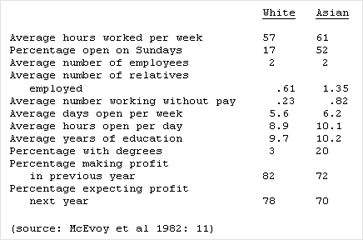 Since then, of course, the High Street has changed dramatically. With the advent of Sunday opening in 1994 and the expansion of supermarket chains into more local retailing, the USP of the Asian on the corner has largely disappeared.

But something else has happened. The children of the Asian shop-keepers have grown up and decided not to follow their parents into the family-run business. A disappointment to mum and dad perhaps - 50% of Asian shop-keepers told researchers in 1982 they hoped to pass on the business to their kids - but with a good education, good English and high self-confidence, it would appear they have decided to do something more profitable instead.

This is encouraging. It reflects, perhaps, the falling levels of racism and general tolerance of our society and is evidence of how waves of migrants become absorbed into mainstream society within a generation or two. 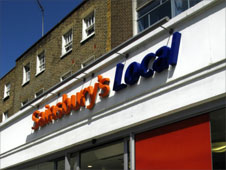 At the end of my road in north London, the Asian-run newsagent recently closed. The owners had decided they were too old to carry on and the kids weren't interested. We mourned the departure of the handy corner shop but, with a small local Tesco and a Sainsbury competing with each other on the other side of the road, one could see that the business case was precarious to say the least.

The supermarkets, however much people might resent the spread of monolithic corporate brands, are open from early until late and have a far wider selection of groceries and magazines than the little corner shop could ever manage. They are also a bit cheaper.

What is interesting is what has taken the place of the old newsagent - a nail bar run by a Chinese woman, and doing a roaring trade. I suspect she is exactly what the previous owner once was - a relatively new immigrant using imagination and hard work to earn a living in a hostile economic climate. It is the same story with the Polish deli down the road, the Turkish kebab shop and the Iraqi-run mini-cab service.

These stores represent the toeholds for new migrants trying to integrate into British society. Their enthusiasm and hard work can revitalise communities, as the Ugandan Asians did in Leicester in the seventies and eighties, for example.

I don't think "corner shop culture" is disappearing. I reckon it just looks a bit different. We can still get a pint of milk on a Sunday evening, but we can get a pedicure too.