Pubs aren't dying - they are evolving

The great British boozer, we are told, is dying. But the widely reported news that 52 pubs are closing every week is not what it seems. In fact, it is probable that there are more places to enjoy a drink now than a couple of years ago.

Look at two sets of data from last year.

The British Beer and Pub Association (BBPA), campaigning against licensing reforms and the smoking ban, told Parliament that close to 2,000 more pubs closed than opened in 2008, (Economic Trends in the Beer and Pub Sector [1.05MB PDF]).

A committee of MPs duly published this graph showing 39 closing a week. 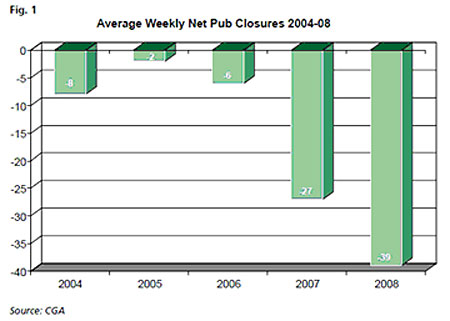 However, if you look at data from the most complete government research into licensing ever conducted, a very different story emerges, (Alcohol, Entertainment and Late Night Refreshment Licensing [561KB PDF]).

After the introduction of new licensing laws in 2005, the Department of Culture approached every local licensing authority in England and Wales and asked them for annual data.

What the replies revealed is that, between March 2007 and March 2008, the number of premises with licenses to sell alcohol increased by 4,200. That's an extra 80 opening a week. 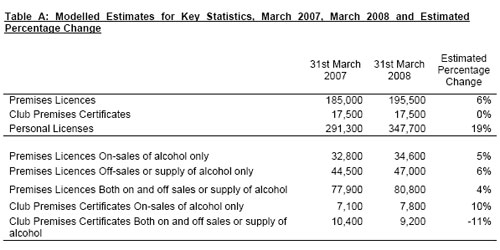 The obvious explanation for the contradictory picture painted by the pub lobby and the bald licensing stats is that they are measuring different things. It comes down to what you define as a "pub".

The source for the BBPA data is a company called CGA Strategy based in Stockport. The company literature says it was formed in 1992 "to provide market intelligence for retailers of Pubs and Bars and Drinks Brand owners supplying the On Trade in Great Britain".

CGA enjoy a pre-eminent position as industry analysts and almost every reference to the state of the British pub seems to come back to them. I spoke to Chief Executive Jon Collins, a former political lobbyist who once ran The Bar Entertainment & Dance Association. "What is a pub?" I asked him. "It can be quite subjective," he replied.

He explained that his company employs a complex coding system with 66 separate categories. If a pub starts selling food, it will move from one category to another. If it sells enough meals, the pub is deemed to have "closed" and a restaurant has opened up.

"It's relatively straightforward if The Crown becomes the Taj Mahal," Mr Collins told me. But he admitted that often it is "more observational".

Mr Collins accepts that there has been "segment migration", with an increase in "casual dining" and a decrease in what the industry calls "wet-led pubs" - bars that don't sell food.

In fact, last week's press release from the BBPA reveals that of the 52 weekly closures the CGA research identifies, 51 are "wet-led" establishments. It also notes that "branded pubs and café style bars are actually opening at a rate of two a week".

I wondered whether there had been an increase in the number of licensed restaurants identified by CGA's coding system. Mr Collins agreed there had - but "not enough" to compensate for all the pubs that had closed.

He did tell me, though, that in the latest CGA data, despite the recession, his figures showed a small increase (0.1%) in the number of restaurants. Hmm.

If CGA Strategy's data tells a story, it may be about publicans who are unable or unwilling to adapt to the 21st Century trading environment.

The pubs that are closing, overwhelmingly, are those that existed to serve customers who came to drink and to smoke. Without the beguiling fug of tobacco smoke and the draw of cheap beer, such places find it much harder to survive.

As Jon Collins told me:

"If your whole market is 50-60 year-old males who have two pints and a smoke in the boozer on the way home from work, you are going to struggle. Now those customers are buying four cans of cheap lager from the supermarket and having a cigarette in their own home."

You may disagree with the new licensing laws, the taxes on alcohol and the smoking ban. You may mourn the demise of old-fashioned tobacco-stained drinking dens. But you could equally argue that the legislation is doing exactly what it was intended to do.

The "night-time economy" is diversifying - instead of countless "vertical-drinking" establishments (pubs where you stand and drink) there is a more mixed economy of cafes, bars and restaurants.

"Maybe there is a socialising effect," concedes Mr Collins at CGA. Tapas bars, pancake houses, burger joints and gastropubs encourage customers to eat as they drink - which some might suggest is a healthy development.

The recent Office for National Statistics survey on attitudes to smoking (Smoking-related Behaviour and Attitudes, 2008/9 [610MB PDF]) included a question about pubs: how often did you visit pubs before the smoking restrictions? 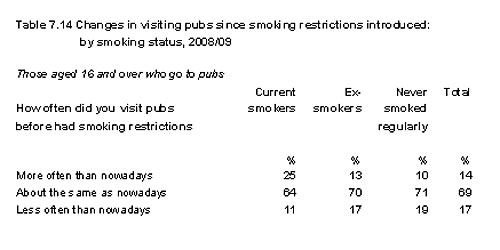 I don't think the great British pub is dying. Just as it has for centuries, it is adapting. It is evolving.