The values of black gang culture are as warped and vile as anything preached in al-Qaeda's terror camps. The death and suffering which follow from its violent, misogynistic dogma are no less devastating. 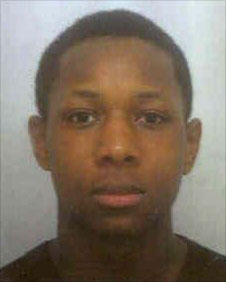 Just read the background to the murder of 16-year-old Shakilus Townsend if you don't believe me. It makes one weep.

But die he did, with a gaping hole in his stomach where one of his killers had twisted the blade of a knife.

So many aspects of this tale make one catch one's breath:

• the fact that young Shakilus had been led to his gang-land execution by his ex-girlfriend, a 15-year-old schoolgirl;

• the fact that two of his killers had "tried hard" to build up a criminal record - the pre-requisite of a true gangster;

• the fact that Samantha Joseph - the girl in the "love triangle" - was prepared to see Shakilus murdered in order to win back gangster Danny Mclean, a man who beat her regularly.

These are the features of a parallel morality, a distorted interpretation of the creed of capitalism where bling is king, where tolerance is weakness, where women are whores, where a criminal record is a badge of honour, where lack of "respect" justifies bullying, torture and even murder.

It is a form of imported fundamentalism as alien to democratic society as the views of the most hard-line Islamists.

Politicians obsess about knives and guns but do far less to counteract the values which inspire the behaviour.

British gang culture models itself on the criminal underworld of black ghettoes in America. There are, of course, white and Asian youths involved in gang violence and crime here in the UK. But look at its victims. Look at the mug-shots. Overwhelmingly they are black - tragic black youths corrupted by a culture which should have no place here.

So why do we tolerate the preachers of black gang culture? Who is effectively challenging this stuff? I don't mean banning it - that almost certainly wouldn't work.

A better approach might be to mock it - make it appear so unsophisticated and out-dated that no self-respecting young black kid would want to be associated with it.

That was President Obama's strategy, you may recall, when asked on MTV last year to comment about a municipal ban on "saggy-pants", the low-slung trousers designed to echo the beltless clothes of prisoners.

"Brothers should pull up their pants", he said. "There are some issues that we face, that you don't have to pass a law, but that doesn't mean folks can't have some sense and some respect for other people and, you know, some people might not want to see your underwear - I'm one of them."

Gordon Brown couldn't get away with saying something like that, of course. But black British writers, commentators, artists, musicians, designers might.

There are examples of brave individuals who are working hard to fight against the preachers of gangsterism. But too often they are shouting into the wind.

The billions spent on marketing gang culture, by businesses who deny responsibility, blow away the counter messages.

It is that poisonous wind which killed Shakilus Townsend and the hundreds of other young black victims of gang violence over the last few years. It is that toxic ideology that turns shiny-faced young children into murderers.