Children in detention at Yarl's Wood

What sort of country sends a dozen uniformed officers to haul innocent sleeping children out of their beds; gives them just a few minutes to pack what belongings they can grab; pushes them into stinking caged vans; drives them for hours while refusing them the chance to go to the lavatory so that they wet themselves and locks them up sometimes for weeks or months without the prospect of release and without adequate health services?

Reading the report (The Arrest and Detention of Children Subject to Immigration Control [2.4MB PDF]) from England's Children's Commissioner, Sir Al Aynsley-Green, into the treatment of children and young people at the Yarl's Wood Immigration Removal Centre near Bedford will leave many feeling ashamed.

Of course, there are no easy answers as to how Britain ensures that foreigners don't abuse our benevolence by claiming asylum without good reason. But can this conundrum ever necessitate our treating children with such cruelty?

Sir Al went into Yarl's Wood almost a year ago and spoke to staff, families and children. The centre is where many failed asylum-seekers are held before deportation. Each year, around 2,000 children are locked up there.

The testimony from the youngsters who find themselves unwittingly ensnared at the sharp end of the immigration system tells a story more resonant of a totalitarian state than of contemporary Bedfordshire.

According to the children's accounts, some were still asleep when the arrest teams arrived - large numbers of uniformed officers who on occasion hammered on the door or even smashed it down and ran into their homes shouting.

One boy of 11 told the children's commissioner:

"There was this woman, just shouting, shouting at my sister to get up. She was in bed asleep and she's only five so she was crying and the woman just kept shouting at her. She didn't have to do that. The search was bad. Why did they have to search my sister? She is only five, what is she going to have? They touch you all over and they're rough. It's rude."

The report explains how some children described officers as taking pleasure in the family's distress, including telling them that they were "going back to their own country" and laughing and making fun of them when they showed signs of distress or anxiety.

One child said that an officer had called his mother "stupid" and laughed at her crying and distress, while others were told that it was "tough" if they didn't like the officer's attitude.

The children and young people revealed that some immigration officers had used force to control and restrain them - a finding that the children's commissioner describes as "a significant cause for concern".

Imagine what it must be like if you are a young child who has lived in the UK for many years, perhaps all your life, to be woken one morning and told you have just a few minutes to pack your stuff and get out.

That, apparently, was a common complaint of the children and families in Yarl's Wood, a procedure that the report describes as "one of the most de-humanising aspects of the arrest process".

Children were forced to leave behind their most treasured possessions such as shoes, school books, toys and music. Many would never be reunited with their belongings.

A single woman told Sir Al that she had been handcuffed in front of her children, aged one and three, after "panicking" when she was told that she had only three minutes to pack.

Another family with two children suffering from sickle-cell anaemia was prevented from collecting antibiotics and folic acid needed by the children.

The UK Border Agency, which is responsible for the system, "accepts the need to do more work around the topic of belongings that are left behind" and is reviewing the use of force and guidance on medication.

According to Lin Homer, head of the UK Border Agency speaking on BBC Radio 4 Woman's Hour last September: "we do not use caged vans, we use people carriers". The "Enforcement Instructions and Guidance" states:

"Families should not be transported in caged vans unless the risk assessment dictates otherwise."

But that is not what the children said. And when challenged, the agency admitted to the commissioner that "contractors do sometimes use caged vans during the 'second stage' transport of families from the reporting centre to Yarl's Wood".

This is often the longer part of the journey, with children imprisoned in vehicles "stinking of urine" and "stained" with vomit. No wonder some said that the journey made them feel like criminals or animals.

What's more, many of the children complained about the lack of "comfort breaks" on the long journeys to detention. This had led to "accidents" in some cases. A chance to go to the lavatory was apparently denied "even when the vans stopped for petrol and, on at least two or three occasions, access to a toilet was denied throughout the whole journey despite urgent requests to stop."

Unsurprisingly, children locked up in Yarl's Wood described it as being "like a prison". Their emotional state was often fragile, their having been ripped from the life they had known with no idea what had happened to their belongings or the pets they have been forced to leave behind and without the chance to say goodbye to their friends. 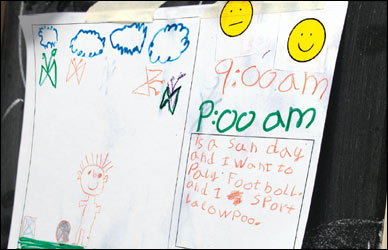 This picture, drawn by one young child and reproduced in the report, says that it is 0900, "it's a Sunday and I want to play football and I support Liverpool".

The healthcare of the children at Yarl's Wood was also found to be poor, in particular the need to ensure that youngsters are protected from disease when they are returned to their country of origin.

"Preventative healthcare arrangements prior to removal, for example immunisations and the provision of malaria prophylaxis, were found to be so inadequate as to endanger children's health."

Since the visit, the private contractor which runs Yarl's Wood, Serco, has appointed a head of clinical governance and a paediatric nurse.

Sir Al's findings relate to a visit almost a year ago, a year in which the government has agreed to adopt fully the UN Convention on the Rights of the Child (see previous post, UK to give up child rights opt-outs). 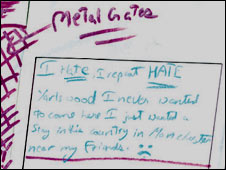 Article 37 of the convention states that the detention of a child "shall be used only as a measure of last resort and for the shortest appropriate period of time".

The children's commissioner believes that this means that the government must put an end to the detention of children "for administrative purposes". He wants "an urgent review" of the system but accepts that nothing can happen immediately. (You can listen here to Sir Al on this morning's Today programme.)

The government, on the other hand, signed up to the convention confident that it would not prevent them arresting and detaining children of immigrants who were due for deportation.

While today's report welcomes recent improvements and ongoing reviews into the way children are treated by the UK Border Agency, it is not easy to see how the Home Office is going to square its obligations under the convention with its determination to be "tough" on failed asylum seekers with children. In the end, I suspect, lawyers will argue it out and a judge will decide.

UPDATE, 17:07: Following this post, the Border and Immigration Minister Phil Woolas has commented:

"If people refuse to go home then detention becomes a necessity. We don't want to split up families, so we hold children with their parents, and while they are in our care we treat them with sensitivity and compassion.

"This inspection took place over a year ago and since then we have made even further progress, with Yarl's Wood Removal Centre praised on numerous occasions for its children's facilities - in fact Her Majesty's Chief Inspector of Prisons praised us for the 'significant progress' we have made. We now have full-time independent social workers, and a range of trained experts to monitor welfare 24 hours a day."