Could we save billions by legalising drugs?

Five years ago, a Cabinet Office report estimated a figure of £24bn a year - £16bn of that from the costs of acquisitive crime by users funding their habit.

But what if those drugs were legal and regulated? What if heroin and cocaine were available on prescription or at affordable prices? (See my previous post on this debate Legalise Drugs! From maverick to mainstream.)

Today's report [444Kb PDF] by the campaigning Transform Drugs Policy Foundation (TDPF) argues that government must look at the current drugs policy with the cold eye of a cost-benefit analyst. If they did, it is suggested, ministers might save the taxpayer close to £11bn a year. (The figures in the table below relate to England and Wales.) 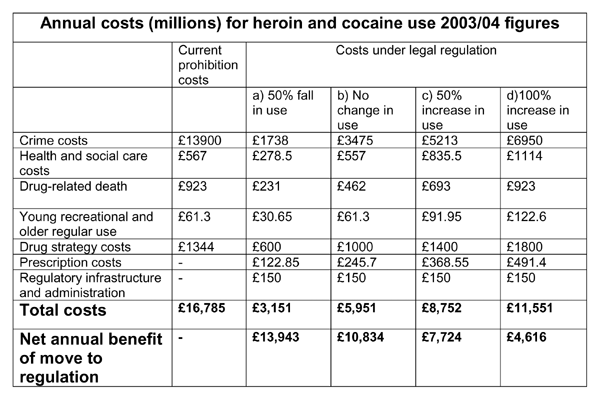 TDPF admits that the sums are back-of-an-envelope calculations because much of the information is simply not available. The conclusions involve, they concede, some "heroic assumptions". 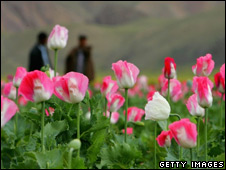 But at the centre of the analysis is the claim that prohibition itself is the root cause of almost all drug-related acquisitive crime. If government took control from the pushers, dealers and gangsters, they suggest, levels of such crime would be "negligible". Even in the "highly unlikely" event that drug use doubled, suggests Transform, a regulated market for cocaine and heroin would see almost £7bn of savings in the cost of crime.

A relatively small amount of property crime is directly related to people's demand for cigarettes or alcohol, it is argued. Take other drugs away from the criminals, and the greatest driver of property crime in the UK largely disappears.

But what about demand? Wouldn't legalisation, as the Home Office suggests in a statement this morning, "risk a huge increase in consumption with an associated cost to public health"?

Drugs are controlled because they are harmful. The law provides an important deterrent to drug use and legalisation would risk a huge increase in consumption with an associated cost to public health.
The legalisation of drugs would not eliminate the crime committed by organised career criminals; such criminals would simply seek new sources of illicit revenue through crime. Neither would a regulated market eliminate illicit supplies, as alcohol and tobacco smuggling demonstrate.

Transform accepts that "whilst some pressures towards increased use may occur under a regulatory model, these would be moderated by effective controls on availability, price, and marketing".

The bottom line, though, is that we don't know. We don't know because government has never done a cost-benefit analysis of its drugs strategy, or conducted an "impact assessment" to ensure that policies are cost-effective.

This, argues Transform, is contrary to Treasury rules which state that

In its statement above, the Home Office explains that the law "provides an important deterrent to drug use". But does the law achieve this end?

In 2002, Tony Blair was told [81Kb PDF] by drug policy analysts in Number Ten that "attempts to intervene have not resulted in sustainable disruption to the (drug supply) market at any level".

Last year, a report [631Kb PDF] from the independent UK Drugs Policy Commission concluded that "law enforcement efforts have had little adverse effect on the availability of illicit drugs in the UK".

Today's Home Office statement offers another reason for not considering the legalisation/regulation model.

The legalisation of drugs would not eliminate the crime committed by organised career criminals; such criminals would simply seek new sources of illicit revenue through crime.

This strikes me as an odd argument, as it implies that it is pointless trying to eliminate any area of criminality because the bad guys would simply go and find something else bad to do.

What this is really about, surely, is a moral and political argument being challenged by a methodical and technical one. For generations, we have been told that recreational drugs are "wicked" (although alcohol is omitted from the axis of evil), and few in Westminster want to appear "soft" on sin.

It is interesting, however, that the Liberal Democrat Shadow Justice spokesman David Howarth has said this in response to the Transform report:

For far too long, drugs policy has been dictated by what sounds tough rather than what works.
We continue to pursue the same policies, despite the fact that the availability and use of drugs are up, prices are falling and drug-driven crime remains rife.
If the government are sceptical about these figures, then they should come up with their own cost-benefit analysis immediately. It would be a welcome nod towards evidence-based policy.

Perhaps we are witness to further signs that the debate over prohibition is hotting up.