Thinking about children and crime

Standing next to a teenager who is holding a large kitchen knife, and knowing that she had previously stabbed her sister, is as good a place as any to consider Britain's relationship with children who commit crime.

I was in Finland, a country travelling down a very different philosophical road from Britain. While the UK locks up around three thousand juvenile offenders, Finland's criminal justice system incarcerates just three. And the girl with the kitchen knife is not one of them.

"We do not think the proper way to take care of a child is by punishing the child", says Kurt Kylloinen, director of the 'reform school' I was visiting outside Helsinki.

Set in thick woodland, the institution was once a girl's boarding school and its rules, even now, have changed little. The girl with the knife was cutting onions in a cookery class. 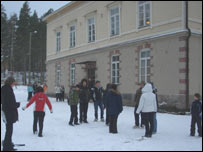 The youngsters cannot wander off but there are no keys, no bars, no guards. If they do disappear, they will be brought back again.

The age of criminal responsibility in Finland is 15, although in practice very few youngsters under the age of 21 are dealt with by criminal justice system. Children who break the law are seen primarily as welfare cases.

Over 60% of children locked up by the state in the UK are known to have mental health problems. In Finland such youngsters are more likely to be patients in well-funded psychiatric units.

When I explained that in England and Wales children as young as 10 are dealt with under the penal code - and in Scotland as young as eight - the reform school's psychologist Merja Ikalainen looked aghast. 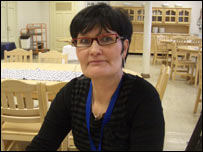 MI: I don't have words for that. It sounds so horrible.

ME: You think it's immoral?

ME: Why? If a young person knowingly commits a crime?

MI: That's not a young person. That's a child. They need care.

ME: But shouldn't a child have to suffer the consequences of their actions?

MI: Suffer! You use words that sound really horrible. A child shouldn't be suffering. The word suffer sounds really sad.

Back in central Helsinki, I thought about Merja's remarks sitting in a prison cell. The simple design, the angry scratch marks of previous occupants on the walls, the high window and thick bars, all looked familiar enough. But walk out of the door and you find not a jail but a luxury hotel.

Such a contrast. While we are busy building prisons, the Finns are closing them. They used to lock up four times as many people as their Nordic neighbours but made a deliberate decision to turn away from their Russian past and adopt a liberal Scandinavian approach to criminal justice - particularly in relation to juveniles.

It is now a society that sees delinquency and youth crime as welfare issues. Even two shocking mass murders involving teenagers opening fire in Finnish schools have not hardened attitudes.

"I think people understand that the individuals who committed these crimes had some problems earlier that were not identified or noticed by family members or society", says Helsinki's deputy police commissioner, Jari Liukku. "I think (the incidents) are more underlining the fact that we have to find out the reasons for this."

When I went to Helsinki's main mall, I could not find a single shopper who thought the state was "too soft" on juvenile offenders. One man, unshaven and heavily tattooed, gave this response to the idea that badly behaved teenagers need punishment: "That would be useless", he said, shrugging.

The tabloid papers cover youth crime, but you will never see the culprits described as "thugs" or "yobs".

"It's a question of our culture and our ethics", explained Mika Molsa, crime reporter for Finland's biggest tabloid. "We don't think that those young people are evil. They have some problems in the homes when they are growing. So we have to solve those problems first."

It is a less adversarial society than Britain. Proportional representation has created a political culture based on consensus and compromise. Public discourse tends to be less polarised and reactionary.

Many people in the UK will find the Finnish model extraordinary. The feeling is mutual. Finland is a low crime society and, although police report a slight rise in youth offending, the Finns regard Britain's "obsession" with prison as barbaric and ineffective. 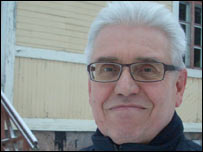 Back at the reform school, I pressed Kurt on the results of their approach:

KK: After they leave this institution the amount of crime these children do diminishes remarkably. Very few of these children that leave us at about 17-18 years commit any crimes any more.

ME: It costs 240 euros a day to keep a child here, which is equivalent to a luxury hotel. Is that really money well spent?

KK: It is, certainly. Every euro is very well spent at this time when we can influence the child's future behaviour, because the money spent later may be much, much more.

The "prison works" philosophy is not only being challenged by liberal Scandinavian countries. Even in parts of the United States, officials are beginning to wonder whether incarceration is effective. And there are debates in the UK as to whether our age of criminal responsibility should be raised to 14, especially given Britain's recent signing of the UN Convention on the Rights of the Child.