The Home Office has been anxious about public confidence in published crime statistics, but some will wonder whether today they may have undermined their credibility.

Regular readers will know of my scepticism that we ever suffered an "epidemic" of knife crime this year, but I would urge extreme caution in drawing conclusions from the latest data released by the Home Office.

Firstly, the new numbers are not official crime statistics. They will not be published by the Office for National Statistics, which is independent of government and supposedly ensures figures are free of political spin. 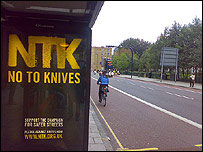 Instead, the Home Office has rung up police forces and asked them for statistics to illustrate the effectiveness of their "Tackling Knives Action Programme" (TKAP).

Sounds good. But 17% actually equals, er... 17 incidents. In June, there were 98 serious offences. In October there were 81. In fact, the Home Office confirmed to me this afternoon that in September, there were only 68.

This is statistical nonsense. Some papers may like to proclaim tomorrow that knife crime has "soared 19%" on the basis of the figures from the latest two months. But this would be equally misleading. When you get down to such small numbers, percentage change doesn't mean much.

And comparing figures month on month is also questionable, because crime is seasonal. Gangsters don't go out so much when it gets cold.

Here's another of their claims.

Odd to choose April to September, when their scheme only really got going in July. Sceptics might think this has something to do with the fact that recorded knife crime was already falling before their scheme.

What about the rest of the TKAP areas? Well, we don't know the story elsewhere, because the Home Office only got the figures from the police on the understanding that they would not publish a regional breakdown. So we can't tell whether knife crime has gone up in one place and down in another.

We also don't know what figures the Home Office may have been given but decided not to publish.

None of which is to suggest that these selective statistics don't offer some encouragement. If you increase targeted stop and searches by 10,000 per month and then see a halving of the proportion of those operations which uncover a weapon, it may mean that fewer young people are carrying knives.

But what today's announcement really looks like is an attempt to show cause and effect: politicians take action on knife crime and, within weeks, knife crime falls.

And realistically, it is not that simple. The intense level of activity is unlikely to be sustained. Changing behaviour and shifting crime trends are jobs for the long term.

Perhaps the Tackling Knives Action Programme reassures people that something is being done. It's also important that people have confidence in crime statistics.