Map of the week - How will you die?

My blog styles itself "the way we live". But this week's Map of the Week is all about "the way we die".

'The Grim Reaper's road map', published today, analyses almost 15 million death records for the years 1981 to 2004, exposing the patterns of death in modern Britain.
"There's nothing certain in a man's life except this: That he must lose it" as Aeschylus noted. But, of course, very few can be certain where or when their end will come.

If you want a clue, this week's maps offer just that. They show the most common cause of death for seventeen age groups in a thousand separate neighbourhoods over 23 years. And an extraordinary tale they tell. 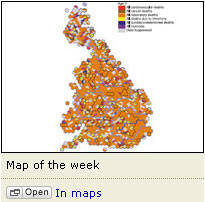 The story begins in the first year of life when the most common cause of death is respiratory. But the second map for ages 1 to 4, reveals a much wider variety of causes of death groups. There is no obvious geographical patterning apart from transport being more prevalent as a cause of death in the north than the south.

For the next age group, 5-9, transport deaths dominate the northern half of the map even more, while childhood cancers are the most common causes of death in the southern parts of the country.

By the ages of 10 to 14, deaths from traffic are most common across even more of the country.

The Easterhouse neighbourhood of Glasgow is the only place where homicide was the leading cause of death in this period. (Homicide does not appear on any of the older age group maps, but appears somewhere on every map for every younger age group.)

As we move into the late twenties, we begin to see cancer creeping into the picture and by ages 30-34, the map colours change radically again, with cancer now dominant, particularly in rural areas. In other rural neighbourhoods we start to see cardiovascular causes appearing.

By the ages of 35-39 the map is dominated by cancer as the most common cause of death, but cardiovascular causes are now becoming evident in northern urban areas.
There then follows a series of maps covering the five-year age bands from 40-44 through to 70-74.

On all of these maps the most common causes of death are cardiovascular or cancer and they show the changing geographical variation across these years of age. At younger ages cardiovascular causes dominate in the northern parts of the country and London, and gradually extend southwards and eastwards.

By ages 65-69, cardiovascular is the most common cause of death across almost all of the country, apart from a ring in the south east around London where cancer dominates. At 70-74, only one neighbourhood,

Surrey Heath North, has cancer as the most common cause of death, the rest of Britain having cardiovascular as the main cause.

At ages 75 and over, the leading cause of death in every neighbourhood is cardiovascular and so the whole map is a single colour. I'd be delighted for you own observations on these maps. Does your neighbourhood have an unusual death pattern? What are the explanations?

The maps also expose misplaced priorities, it seems to me.While we obsess about knife crime and drugs, the real killers of our young are transport and suicide.