It must be the perverse part of my nature, but when asked to go somewhere that illustrated the looming recession, I chose the place analysts had identified as the most immune to the downturn.

Corby in Northamptonshire is regarded as a boom town: huge expansion is under way - a new shopping centre, railway station, Olympic swimming pool and thousands of houses. But there is no hiding place from the cold winds heading Britain's way.

New Labour's anthem from the mid-90s promised "Things Can Only Get Better". And Corby has been living that dream. It still is - riding the wave of consumerism that has transformed Britain. But now people are glancing at the small print warning how things can go down as well as up. 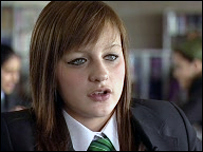 I met 15-year-old Leanne Noonan learning how to lay bricks as part of a construction course at a local college. After leaving school she hopes to join the local building boom. Talk of recession takes her into scary, uncharted territory: since her very conception, Britain and Corby has always been getting richer.

"There's always something better coming out that you can get," she tells me. Like many of her generation, Leanne inhabits a world where status and self-worth are measured by brands and shopping choices - a culture of materialism built on brittle plastic foundations.

"When you go out shopping you just get a thrill and you want to buy everything. But if you haven't got the money and you've got no clothes and no trainers people will be looking at you dead weird," she admits.

"If I was to wear two-stripe trainers then people would be like - 'hah! what are you wearing?'" Leanne explained to me. If you are teenager, the number of stripes on your trainers can make a difference.

Leanne's school, a brand new Norman Foster-designed academy, was commissioned as a beacon for an expanding, confident Corby. But all is not well. Hundreds of family homes should be under construction just beyond the school gates. Work has come to an abrupt halt.

We looked out of the school window at the empty acres. "That", I told her, "is what a recession looks like." "My future's just going to end up like that if this carries on," she replied. 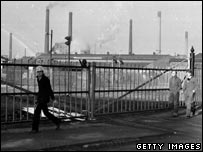 Corby was once defined by its steel industry. When that died, it reinvented itself as a service-based economy - echoing the changes across Britain. Today huge warehouses circle a town which has become a logistics hub for a nation addicted to shopping.

Janita Mackin was born, bred and is now a successful accountant in Corby.
"Like most girls in this country I was definitely born to shop," she tells me as we walk around the shiny new shopping centre. "In the past we had to go outside of the town to get any kind of variety, but now the shops have come to us and that's fantastic news."

The chain stores which have chosen to open in Corby represent feathers in the cap of a 21st Century British town. "It's quite nice to be able to look through and see some new shops, brand names that we've all wanted for such a long time" Janita says.

"It's lovely to have all these things, buy the house you want and fill it with all the things that you want. But it can't go on for ever it would be almost wishful thinking."

When the out-of-town shopping experience came to Corby, the town felt a wave of self-confidence. But for Janita's father, Frank Black, the giant Asda tells a more poignant story. 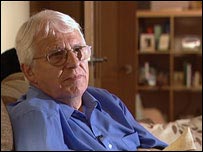 "Literally where we are at this moment was the blast furnaces of the steel plant", he told me as we walked the central aisle of the store.

From steel-making to shopping. From manufacturing to retail.That spot sums up the change in Corby and Britain.

Frank has photographs documenting the moment the furnace crashed. With its destruction, he became a statistic in a town with 30% unemployment. Frank understands what the word recession means.

"At that time there wasn't credit cards to run up bills and hope for the future - we struggled, simple as that." There was a sense of community in Corby which saw people through. Most of the residents were in the same boat, families relocated from Scotland to provide the labour for an industry that had died. This time, Frank fears, the social glue is much weaker.

"There's a lot of immigrants come into Corby - they've been welcomed - I haven't heard anybody speak against them," Frank says. "I just wonder, when people start losing their jobs and the immigrants have got work, I wonder if there'll be any response to that. That does concern me."

He also describes a generation of young people who don't know what it means to tighten belts and go without. He predicts difficult times ahead - but he is not fatalistic.

"We've just got on the bandwagon and enjoyed life. I really think, in a daft sort of way, this might help to save us.Make us see sense."

Corby cannot escape the cold winds of recession, however optimistic the analysts may be. But it is a town that has been through adversity more than once and found ways to reinvent itself. I wonder how different Corby and Britain will be two or three years from now.