UK to give up child rights opt-outs

For 17 years British government ministers have been accused of denying human rights to one of the most vulnerable groups of children in the country - namely refugee or migrant children.

Thanks to an opt-out from parts of the UN Convention on the Rights of the Child agreed in 1991, immigration officials have been able to lock such youngsters up for weeks or months without any judicial oversight. All it takes is a home office minister to give the nod.

Now I learn that next week, in a move that will no doubt please the rank and file at Labour's annual party conference, the UK will sign up to the convention in full.

Foreign Secretary David Miliband has drafted a letter to send to the UN secretary general advising him that the government is now convinced asylum-seeking children should share the same rights as other youngsters.

The convention obliges signatories to put the "best interests" of a child first but British ministers have always argued that the rule should not apply to refugee or migrant children when there is doubt about their right to stay in the UK.

In other words - controlling immigration was more important than children's rights.

Home Office Minister Liam Byrne told Parliament last year that while the UK government honoured "the spirit" of the convention, "there are a number of instances where [putting the best interests of a child first] may prevent lawful immigration functions being carried out."

Human rights groups have heaped scorn on the UK opt-out for years. Liberty recently described it as "an international embarrassment" that "dehumanises migrant children". But ministers continued to argue that "removal of the reservation would... be used to frustrate effective immigration control."

The opt-out has made it easier for the UK Border Agency to detain migrant children for weeks or months. 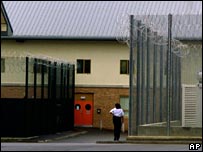 Most such youngsters are held at the Yarl's Wood detention centre in Bedfordshire. This week, a report from the Commissioner for Human Rights at the Council of Europe, Thomas Hammarberg, revealed that when he visited the centre in April there were 31 children incarcerated of whom 10 had been held for more than 60 days. Seven of those were under four years of age.

In December 2003, following strong criticism, the Home Office agreed that no child would be locked up for more than 28 days without weekly ministerial authorisation. However, the safeguard has not changed matters much and Britain has still found itself pilloried for its treatment of migrant children.

Unlike terrorists, whose rights are protected by a judicial process, the liberty of youngsters like Child M from Iran is in the hands of politicians. His case has been the subject of a High Court challenge which prompted the authorities to free the boy before the matter was put before a senior judge.

On his release he spoke to the BBC about his time at Yarl's Wood, watching other asylum seekers being let out while he was forced to stay. "People were being released and I thought they could go anywhere", he said. "Right from the bottom of my heart I really envied them. I kept asking Mum when are we going to be freed from here."

His mother says the little boy will always bear the emotional scars of his time held by the authorities. "It is impossible for him to forget the memory of when they raided our home and locked him in a van", she told us.

"He said to me 'Mum, they have put us in an iron cage'. I don't think he will ever get over it for the rest of his life".

It is no coincidence that the announcement will come early next week ahead of a meeting at the United Nations in Geneva when a British government delegation was to be questioned about respect for children's rights.

The UK finds it acutely uncomfortable to be ticked off by the United Nations over its human rights record and this change of heart will make the hearing a great deal more comfortable. It is not, though, a vote winner for the government.

Public anxiety over immigration remains high and there will be concern that "human rights" will be exploited by families and young people who have no right to be here.

Ministers have agreed to sign the convention only because they have been convinced that it will change very little. But even before the ink has soaked into the vellum, lawyers are considering how ratification alters the landscape of immigration law.

The key question will be whether it can be argued that the "best interests" of a migrant child are served by keeping the youngster with his or her parents in detention.

Some lawyers will argue that the child's welfare can only be protected by liberating the youngster AND their family.

There will be arguments too about the deportation of minors. The courts are likely to be busy working out what David Miliband's signature on the convention really means.