Births outside marriage - a real cause for concern

Unless trends change, in just eight years time most babies in Britain will be born outside marriage.

If the rate of increase remains as it has been since 2000, my maths shows that by 2016 more than 50% of UK babies will be born outside wedlock

Well, today the Economic and Social Research Council pulled together some of the key findings from the British Household Panel Survey (BHPS) - a huge study of 10,000 British adults interviewed every year since 1991.

Using 17 years of detailed longitudinal data from the BHPS, Professor Ermisch has been able to follow the stories of hundreds of real babies and calculate how much time they have spent living with just one parent.

This matters because there is powerful evidence that children growing-up without two parents have worse outcomes as young adults. Professor Ermisch refers to the "long-term negative consequences" of a child spending significant parts of their childhood in families with only one parent. 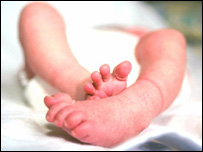 A baby born to married parents, on average, spends 1.6 years of their first 16 years with a lone parent. A child born to cohabiting parents spends 4.7 years with just one parents and an infant born into a single mother household spends 7.8 years.

The experiences of the babies in the British Household Panel survey indicates that being brought up by a lone mum or dad, particularly before they start school, translates into lower grades, worse job prospects and poorer health.

Marriage levels in Britain are at an all time low. Cohabitation has risen 64% in a decade, with just over a quarter of recent births to parents who live together but are not married.

But why should it make a difference to the life-chances of children whether their parents have a marriage certificate stuffed in a drawer? The BHPS provides help in this respect.

Only 35% of children brought up by unmarried parents will live with both parents throughout their childhood. For those with married parents the figures rises to 70%.
As Professor Ermisch puts it: "Having a child in a cohabiting union is often not indicative of a long-term partnership."

What is more, if an unmarried mum breaks up with her partner, it can take a long time to find a new relationship. More than half are still without a partner five years after the break up.

The conclusion, according to Professor Ermisch, is that "non-marital childbearing in cohabiting unions tends to create lone mother families".

The research has been seized upon by religious groups who regard procreation outside marriage as a sin.

The findings have also informed David Cameron's argument that government should do more to support and encourage marriage. He has promised "to overhaul the tax and benefit system in favour of marriage as part of a Conservative crusade to mend Britain's 'broken society'."

Elsewhere in today's tribute to the BHPS, there is an essay on what the survey tells us about young people and the importance of families.

What the data and scientific analysis does not do is make a moral judgement about the way people should bring up their kids. Clearly, millions of parents do a fantastic job in rearing children within a wide range of family types that don't match the traditional nuclear model.

But what the British Household Panel Survey does is demonstrate why the nuclear family became traditional. In terms of outcomes for children, it is most likely to work best.