The war on drugs

In most people's minds perhaps, the front line troops in the fight against drugs are police on our streets. 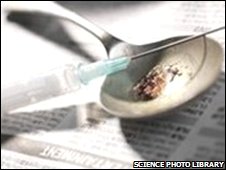 The political rhetoric focuses on the need for robust enforcement - zero tolerance and tough sanctions for dealers and users. But what if it doesn't actually work? What if it actually makes the situation worse?

Well, those are questions posed by today's report from the independent think tank the UK Drugs Policy Commission [pdf 632KB].

Despite hundreds of millions of pounds spent each year on UK drug enforcement activity, the commissioners argue there is "remarkably little evidence of its effectiveness".

Drug markets, they conclude, are "extremely resilient" and all the criminal justice activity has had "little street-level impact".

Indeed they go further, warning that law enforcement efforts can have a significant negative impact.

Such conclusions are reached by looking at the illicit drug market as a business. It is, they say, one of the most lucrative of its type in the world - worth an estimated £5.3bn - equivalent to a third of the entire tobacco market and over 40% of the alcohol industry.

They estimate there are 300 major drug importers, 30,000 wholesalers and 70,000 street dealers on the streets of the UK.

Currently a quarter of the UK government's drug strategy budget is spent on reducing the supply of these illegal substances - £380m in 2005/6. What impact has that had?

"Law enforcement efforts have had little adverse effect on the availability of illicit drugs in the UK" say the commissioners Seizures of Class A drugs have more than doubled in a decade but average street prices, they claim, have fallen consistently for heroin, cocaine, ecstasy and cannabis.

"The drug networks are highly fluid, adapting effectively to law enforcement interventions", says the report. If supplies are hit for a time they simply reduce the purity level of their product increasing their profit margins.

The commission accepts that supply reduction has an important part to play in harm reduction but using the criminal justice system to do it may be making matters worse.

Police crackdowns can, they say, increase threats to public health and safety by altering the behaviour of individual drug users and potentially setting up violent drug gang conflicts as dealers move to new areas.

It is in many ways a bleak assessment of the government's entire approach to the drugs problem. Not only do they question the ineffectiveness of police activity but there is also criticism of that other key plank of the official drug strategy - treatment.
They suggest the programme suffers from high attrition rates, low completion rates, inconsistent quality and availability of services.

So what are the answers?

The UKDPC do not call for legalisation or decriminalisation overtly, but they do point out that while "the illegal status of drugs is likely to have contained their availability and use to some extent...drug laws do not appear to have direct effects on the prevalence of drug use: 'tougher' enforcement measures have not necessarily deterred use".

Instead of filling prisons with thousands of low-level dealers from sink estates, the UKDPC proposes a more targeted approach - forming local partnerships to channel users into treatment, working with communities to help them become more resilient to drugs, disrupting open street-level markets which affect community confidence but not simply driving the drug gangs elsewhere.

To some extent, the harm reduction message has already been accepted. The Director General of Serious Organised Crime Agency Bill Hughes recently told MPs: "in the past too much emphasis has been placed on lower level street deals. What we are trying to deal with are the major importers."

The drug strategy for England and Wales published last April makes remarkably few claims for the effectiveness of police crackdowns.

While citing "robust enforcement" as a key plank of their approach, evidence that it actually works is limited to a few lines: "There is some evidence that enforcement activity can affect drug prices" it states.

'Some evidence' is hardly a ringing endorsement of the tactic, and the claim that "there is evidence of the UK wholesale price being greater than that in continental markets" does not reflect the UKDPC's research showing falls in British street prices over the past decade.

The strategy also claims that "tough sanctions...have contributed to a fall in recorded acquisitive crime of around 20%". They refer to the flagship Drugs Intervention Programme which forces offenders into treatment.

However, my analysis suggests that such crime was falling faster before the scheme was introduced. The British Crime Survey shows that household crime in England and Wales fell 7% a year before the programme and 4% afterwards.

Today's report calls for rigorous assessment of the effectiveness of enforcement, but it seems unlikely that any government would want to question whether getting tough with drug abusers on our streets actually works.