Britain has a drink problem

At a meeting inside No 10 last November, the prime minister told the drinks industry it was on the naughty step. Unless behaviour improved, relations would become distinctly frosty. 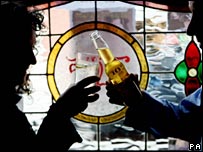 For years, ministers have tried to stay best buddies with the big brewers, bar owners and distillers, promising to maintain a light touch on their businesses in return for a bit of self-regulation and corporate responsibility.

Those who warn of the consequences of the "demon drink" risk being dismissed as puritanical kill-joys, a charge considered so toxic to electoral success that politicians have traditionally steered well clear.

But patience has now worn very thin as the true cost of alcohol to British society becomes ever clearer...

"Mandatory regulation and labelling could be on the cards for the alcohol industry" says an official government press release today. Happy hours could become unlawful. Customers may have to be offered smaller servings with clear information on how many units are contained.

Since no article on this subject can survive without the cliché, let us get it over with now: if they weren't there already, the drinks industry is firmly in the last chance saloon. 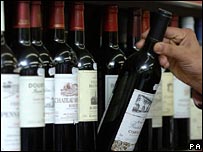 "The drinks industry is not adhering to its own voluntary standards, and new evidence suggesting that alcohol is a far wider cause of damage to people's health than previously suspected" says the Department of Health which calculates that the cost of alcohol misuse in England is £17.7bn to £25.1bn per year, with a cost to the NHS of £2.7bn.

Home Office Minister Tony McNulty makes a similar point. "In many places alcohol is being sold and marketed irresponsibly" he says. "Over the next few months we will work intensively with industry representatives and other interested groups to breathe new life into the system. If necessary we will introduce legislation to make the new standards mandatory."

Politicians find this very tricky territory, so even after all the warnings, the industry is still being given a "few months" to get its house in order.

If terrorists or bird flu were killing 500 people a month, ministers would announce a state of emergency. But no. This is alcohol and Parliament restricts itself to encouraging "responsibility".

"Alcohol can play an important and positive role in British society" the government literature states. How different from the "just say no" message for much less harmful drugs.

Indeed, ministers insist the drugs strategy and the alcohol strategy remain separate despite numerous calls from experts to do the logical thing and bring them together. 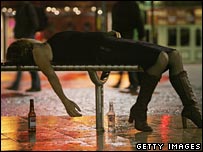 Britain's relationship with booze is so deeply engrained in our way of life that government dare not say what is obvious - we drink too much.

Russians find it hysterical. Italians think it disgraceful. But for the British, drunkenness is a bit of a laugh. No - it is more than a laugh. Getting bladdered, plastered, slaughtered and legless are seen as part of our cultural heritage. It's traditional: births, weddings and funerals, Friday night, Saturday night, you passed, you failed - who needs an excuse?

On prime time TV, those home movie shows feature pie-eyed party-goers falling over and a nation collapses in mirth alongside them. Yes, it's just a bit of fun. Letting our hair down.

But we worry too. And so we might as we count the "trickle-down alcoholics" - 6,000 children on alcohol treatment programmes last year. A thousand of them under 14. The average amount of booze slipping down the necks of our under-15-year-olds has doubled in a decade. One hundred kids a week hospitalised through drink - most of them girls. A sevenfold increase in young men dying of chronic liver disease since the 70s.

Drug workers say that alcohol is now the drug of choice for our young people - the key component of what is called the ACE profile - alcohol, cannabis (or possible cocaine) and ecstasy.

A quarter of drivers caught over the limit are under 24 - last summer it was teenagers who helped push drink driving figures to a 10-year high.

It's not just youngsters. Asked about their drinking habits, almost four out of 10 men in Britain emerged as hazardous drinkers. And those were the ones who admitted it. The cost of the damage done by alcohol, both economically and socially, makes the idea that it's only a few spoil-sports who are to blame utterly ridiculous. Britain has a drink problem.