Nigeria set to expand its activities in space

I remember distinctly when Nigeria adopted its national space policy in 2001 someone turning to me in the BBC newsroom and saying, "what on Earth does Nigeria need a space programme for?" 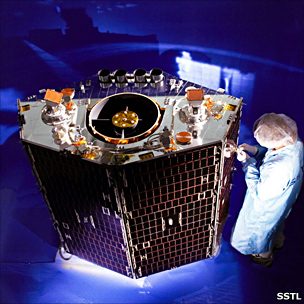 It's a question you often hear directed at India as well as it pursues its ambitions in orbit.

There's an assumption among many, I guess, that space activity is somehow a plaything best left to wealthy industrial countries; that it can have no value to developing nations.

The money would be better spent on things like healthcare and education, so the argument goes.

But what this position often overlooks is that investment in science and technology builds capability and capacity, and develops the sort of people who benefit the economy and society more widely.

It is investment that helps to pull the country up (and industrialised nations know it; that's one of the reasons they invest so heavily in space activity, also).

This is certainly the line taken by Dr Seidu Mohammed. He is the director-general of Nigeria's space agency - the National Space Research and Development Agency (NASRDA), which has an annual budget in the region of $50m.

He told me that space brings great benefits to his country:

"Our own space programme is not an ego trip; it is not meant for lunar missions. It is meant to solve problems at home; problems of agriculture; problems of water resources development; problems of environment, and so on and so forth."

Nigeria will launch two satellites in the coming months on a Russian/Ukrainian Dnepr vehicle from the Dombarovsky cosmodrome. 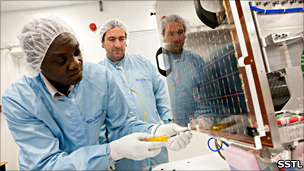 The first is a top-notch small satellite produced by engineers at Surrey Satellite Technology Limited (SSTL) in Guildford, UK, for Nigeria. An extremely powerful platform, NigeriaSat-2 will be able to resolve details down to about 2.5m across.

When it gets into orbit, it will actually give Nigeria an imaging spacecraft more capable than any such asset owned by the British government (the UK calls up "Uncle Sam" when it needs very high-resolution images).

NigeriaSat-X is not quite in the same class (22m resolution) but what's most interesting about this spacecraft is that it has been built by Nigerian engineers under the direction of their SSTL counterparts.

They will be able to go home and make future spacecraft themselves.

It's a model followed by Turkey. They received their education at SSTL as well, and when the Dnepr flies it will also carry RASAT to orbit.

This is the first remote sensing satellite (7.5m resolution) to have been developed and manufactured in Turkey by Turkish engineers.

"NigeriaSat-2, in our opinion, when launched, will create a data revolution, not only in Nigeria but in the whole of Africa. In 2009, Nigeria, along with Algeria, South Africa and Kenya, signed a major memorandum that enables Africa to work with itself - which is the Africa Resource Management Constellation. NigeriaSat-2 will be the first satellite in that fleet. It will create a number of data that enables Africa to achieve the so-called Millennium Development Goals and other African initiatives.

"So, to a large extent we are looking to that with excitement. Being a higher resolution image, it will provide the ability to do cadastral mapping (to describe the land and its ownership) in Nigeria. This in our opinion will improve the revenue base of most states by more than 1,000%, and this will go a long way in supporting governance, because we believe governance is about providing welfare in education, health and some other areas."

Nigeria has something like 40 people around the world right now doing PhDs in some aspect of space engineering. There are many completing MSc studies, too. It's all knowledge that they will take home.

Nigeria has grander plans, of course. A key goal in the coming years is to develop a radar satellite. The climate experienced in the southern part of the country means it gets a lot of cloud cover, and the only way you can see through cloud is with radar.

At the moment, there is a lot of oil theft in Nigeria - a practice known as "bunkering". And there are many foreign vessels that come into Nigerian waters to fish illegally. It all amounts to billions in losses to the national economy.

Keep an eye out for the Dnepr launch in the months ahead. The two Nigerian satellites will both go into the Disaster Monitoring Constellation (DMC), the UK-managed network of remote sensing spacecraft that provide rapid imaging in times of crisis. 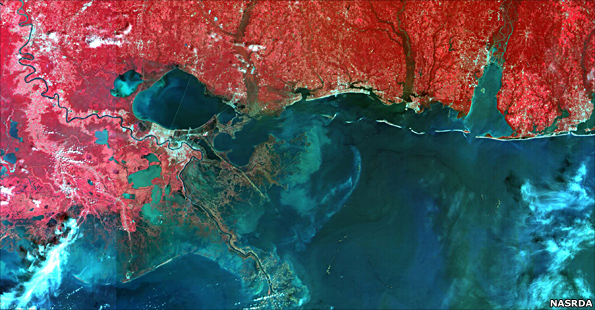 NigeriaSat-1 was one of the first satellites tasked with imaging the aftermath of Hurricane Katrina. NigeriaSat-2 and NigeriaSat-X will also engage in disaster zone mapping