I've been troubled of late by the scale of things, by the vastness of space.

It's been brought into focus by two things, I think. The first is the Voyager 1 probe - the most distant man-made object from Earth.

I've written a couple of articles recently about this veteran explorer. Launched in 1977 on a grand tour of the outer planets, it's now making a push to leave the Solar System. It's getting very close to crossing into interstellar space. Scientists know this from the way particles thrown off our star are behaving in the vicinity of the probe. 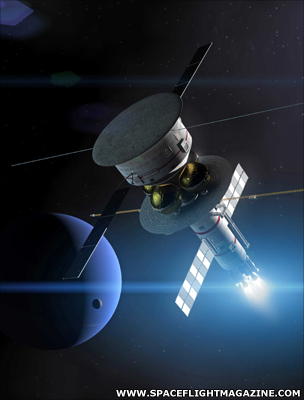 Whereas this "solar wind" has always streamed past Voyager, the particles have now slowed and are moving sideways from it. In other words, Voyager has reached the point where the Sun's domain of influence is pressed right up against that of other stars.

And yet, as extraordinary as Voyager is, its efforts to reach out across space still seem quite puny. In 33 years, it has travelled 17.4 billion kilometres. That sounds a lot - and it is. But it's a tiny fraction (1/2,300) of the distance to the nearest star - Proxima Centauri.

The implications of the "sluggish performance" from this piece of 20th Century technology are underlined by the latest discoveries from Nasa's Kepler space telescope.

Kepler was launched in 2009 to identify planets by looking for the periodic, tell-tale dips in light as these objects pass in front of their host stars.

The telescope views only a small patch of sky but its findings can be extrapolated across the Milky Way Galaxy. Initial projections would indicate that within about 1,000 light-years of Earth, there may be 30,000 or more planets with potentially habitable conditions.

And here's the point that's been troubling me: if we have difficulty in reaching out to a distance equivalent to the nearest star (4.2 light-years), can we seriously ever think of getting to some of these far-flung planets?

For sure, the next generation of giant telescopes will be able to probe their atmospheres and tell us what sort of worlds they are. But what if we discover that a number of them betray tantalising evidence of biology? What then?

All this brings me to this month's edition of the British Interplanetary Society's Spaceflight magazine. The BIS has always harboured future-thinkers (Sir Arthur C Clarke among the greatest) and the magazine has often acted as their forum for discussion.

The current edition of Spaceflight runs an article from an international team of scientists and engineers - with members in the UK, the US, Germany, Australia and Hungary - who have applied themselves to just this issue.

Project Icarus, as they call their venture, have tried to envisage the ships we could be building in the decades and centuries ahead that might just get us a decent distance across space in a time which means something on a human scale.

New propulsion technologies are key, of course. The feeble chemical rocketry that sent Voyager on its way in 1977 will not do. Most favoured are the emerging electric propulsion systems.

These rely on the motion of highly excited gases, or plasmas, moulded by magnetic fields to provide thrust. Although they don't give the initial big kick you get from chemical combustion, their supreme efficiency means they can go on thrusting for extended periods, achieving far more acceleration per kilogram of fuel consumed.

A glimpse of what may be possible in the future can be seen in what appears to be the current pacesetter - a type of electric engine called Vasimr (Variable Specific Impulse Magnetoplasma Rocket). 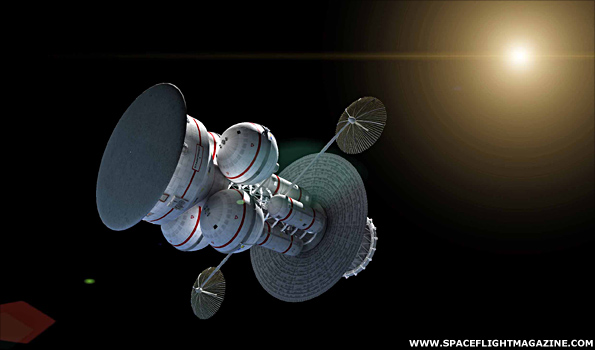 Labelled a "game changer" by Nasa, this technology is likely to be fitted to the International Space Station in the next few years to help boost its orbit, which has a tendency to decay over time as the platform skirts the top of the atmosphere.

Vasmir prototypes have already produced remarkable performance in laboratory tests. The developers, Ad Astra or Texas, believe their megawatt-class units could get a ship to Mars in as little as three months.

Project Icarus envisages bigger systems that could push deep into interstellar space in just a few decades. Nuclear fusion reactors that drive gigawatt-class vessels may eventually get robots and even humans to other star systems.

"To include a crew on a mission that will take decades to centuries presents many engineering and environmental control issues. For human transport the only credible way is a generation ship or a World Ship, carrying tens to hundreds of people who will arrive at the destination and attempt to colonise one of the planets. Before they go, much about the planet will already be known, from long distance exoplanet discoveries.

"In terms of sending an unmanned probe, the main motivation for this is science return. Long range astronomical observations will improve over time with higher fidelity measurements, but it is difficult to compete with having an actual spacecraft in the system able to study any stars or planets close up, perhaps deploying planetary probes and landers - ultimately looking for signs of life. Along the way, the probe can also conduct valuable science such as improving astronomical parallax measurements or looking for gravity waves. The exploration of the cosmos is the main reason for launching a probe like Icarus.

"Ultimately, we would like to find life in the Universe and ideally intelligent life other than our own. Conducting theoretical studies like... Project Icarus is the only way we can push forward to the stage where we can eventually build something like it, and then perhaps someday go see for ourselves."