Chasing the dream of human spaceflight

Form follows function, they say. And if a machine works like a dream, perhaps it ought to look like one as well. Right?

The Dream Chaser could be in orbit by 2014

I have no data to support this hypothesis but it seems to hold, from iPhones to Ferraris. I'm sure you can find examples to the contrary. But consider Sierra Nevada Corporation's (SNC) proposed Dream Chaser vehicle. It looks like a spacecraft ought to look.

This is one of the key US commercial human spaceflight projects now in development. The Dream Chaser already has quite a bit of heritage.

The design calls on a concept initially studied by Nasa about 20 years ago called the HL-20. SNC's vehicle would launch vertically atop a rocket like the Atlas 5. It would carry a crew of seven.

Missions might include crew rotation and cargo re-supply at the International Space Station, but there would be other destinations and duties for an adaptable vehicle like this as well.

Known as the Commercial Crew Development (CCDev) Program, it will soon announce another, larger round of financing; and SNC expects to be at the front of the queue again. Mark Sirangelo, head of SNC Space Systems, told me:

"This next round of funding, if it holds and it gets awarded, will give us all another year to mature our designs and at that point those who have real programmes will stand out self-evidently.

"We'd like to go to the space station. It's not the only thing we can do but I think we have a lot of value there. At the moment, there is no logical way to take things home from the space station [after the shuttle retires]. We can take three people home on a Soyuz but all the science work that's being done up there doesn't have a way to come back. Our vehicle has a particular use for that.

"Not only can it take people back and forth, but the science experiments that are done at the ISS can come back in their racks in our vehicle, and instead of being subject to the very high g-forces of a capsule landing in the ocean or on the steppes of Kazakhstan - we land on a runway; we have less than 2g when we land. You can go right up to the vehicle when it stops, because we have no hazardous material onboard, and take those experiments straight off.

"So, we have a very unique capability to maintain all the science work going on up there. To the extent that we can make the ISS a very functioning laboratory and maintain the integrity of the work they want to bring back - that seems to be a very good use of our vehicle."

SNC used last year's Nasa money to further work on the hybrid rockets that will power the Dream Chaser. 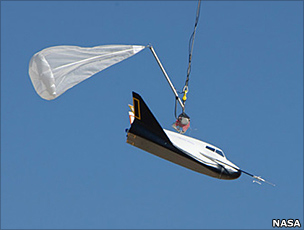 It was able to show Nasa that it could run these motors for the sorts of durations demanded on a full mission, and, critically, demonstrate a stop-start capability. In the rocket business, re-igniting a motor in the vacuum of space is a big deal.

SNC also built the basic structure, or chassis, of the first flight vehicle, and conducted drop tests on a scaled model. These drop tests, begun from a height of 4,000m, returned important aerodynamic data.

At the turn of the year, we got an interesting joint announcement from SNC and Virgin Galactic, Sir Richard Branson's sub-orbital venture that will use a derivative of the SpaceShipOne craft to take fare-paying passengers on short hops above 100km.

SNC is building the rocket motors for Virgin's new craft, SpaceShipTwo (SS2). But, usefully, from SNC's point of view, the tie-up means the flight model of Dream Chaser can soon begin drop tests using the other part of Branson's project - the SS2's carrier plane known as WhiteKnightTwo. Mark Sirangelo again:

"We're building the Dream Chaser flight vehicle right now. Next year, we should be fully testing the vehicle with atmospheric tests. And we're expecting to be flying orbital flights by 2014, so about three years from now. Our whole testing programme has humans onboard. We're using existing [launchers] so we don't have to be designing that, and our vehicle had 10 years of design with Nasa and six years with us - so it's fairly mature as a vehicle.

"There are other things we could do apart from going to the space station. The ability to service things in space goes away when the space shuttle goes away as well - the ability to repair a satellite, or move it to a new orbit, or to do other work in space. We're seeing this much like a utility vehicle that you could outfit for special purposes.

"We would have an airlock; we could put robotic arms on the vehicle to be able to grab things and manipulate them, using the same structure. This would be much like how Boeing and Airbus re-focus their aeroplanes for cargo or for re-fuelling or for fire interdiction. We can do that. Using the same basic frame, we could have a people version, have a cargo version or a utility version."

Looking at the artist's impression of the Dream Chaser atop the Atlas, it reminds me of the European Hermes shuttle and the way it would have been launched on the Ariane 5 if Esa member states hadn't killed it off.

Mark Sirangelo says Dream Chaser would work very nicely off the top of an Ariane. Are you interested Europe?

The Dream Chaser would launch atop an Atlas 5, but could launch on other vehicles as well