A perfect view of the asteroid capsule's Earth return

Nothing can prevent it now. Japan's Hayabusa spacecraft is heading home after its seven-year round-trip to the asteroid Itokawa.

A final trajectory correction has been performed and the spacecraft is on target to hit the atmosphere of Earth above Australia shortly before midnight (local time; about 1400 GMT).

I wrote earlier in the week about some of the woes Hayabusa experienced as it tried to grab dusty fragments from Itokawa's surface, and now it faces one last challenge. And it's a mighty one.

About three hours prior to re-entry, the main spacecraft will eject the sample capsule, pushing it out in front.

The capsule is equipped with a heat-shield and a parachute to get it safely to the ground in Australia's Woomera Prohibited Area.

The mothership has no such protection. Coming home means it will be destroyed. 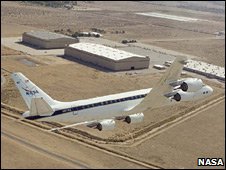 I've been speaking this week to Peter Jenniskens, a scientist affiliated to both Nasa's Ames Research Center and the Seti Institute. Peter has become the "top gun" in the business of chasing objects that fall to Earth.

Nasa put at his disposal a Douglas DC-8 airborne laboratory and he packs it full of cameras and spectrometers to study how things behave as they scream through the atmosphere.

The DC-8 flies up above the clouds, giving the instruments a prime position to record the shower of light as these objects heat up and start to break apart.

If you haven't yet seen the extraordinary footage Peter's team acquired of Europe's "Jules Verne" space freighter when it burnt up over the Pacific in 2008 - watch it now. It's at the bottom of this posting.

Sunday's event won't be quite so awesome - the Jules Verne ship had a re-entry mass of some 13.5 tonnes; the Hayabusa mothership is just half-a-tonne, and the sample capsule is a tiddly 17kg.

Even so, the Japanese hardware will smack the top of the atmosphere at considerable speed. Peter told me:

"We will set ourselves up close to the end point of the approach trajectory so that we have a frontal view of the capsule. Our main interest is in studying how hot the capsule becomes, how much light is being produced in the shockwave and how much material comes off the heat-shield. And when the heat-shield is recovered on the ground, we can see how well the material performed. It's like a field test of a thermal protection system. This is only the second time we have been able to do this. We did it before with Nasa's Stardust capsule. The opportunities to study how well a heat-shield performs in really fast re-entries - Hayabusa's capsule is coming in at 12.2km/s - are extremely rare."

The capsule will be little more than 2,000m ahead of the mothership when the pair hit the atmosphere. It's certain the main spacecraft will steal the show.

First, its solar panels will be ripped off as it gets down to about 91km, and then the main bus will be torn to shreds. Pretty much everything will be vaporised. 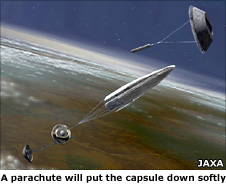 Out in front, the capsule's heat-shield will be glowing for the cameras as it bakes at 3,000C, but everyone will be keeping their fingers crossed that its integrity holds.

The shield is made from a carbon phenolic resin. It's an ablator, meaning it's designed to lose material. As that material comes away, it carries some of the heat with it and that helps to cool the main structure.

Peter expects his team to be able to follow the capsule's light trail down to about 45km altitude, perhaps even deeper. As it continues to fall and cool, it will go dark to the instruments.

A parachute should open at about 10km altitude for the final moments of the descent.

All the data from the DC-8 instruments will eventually be used to improve the models that engineers employ to design heat-shield systems. And were a spacecraft ever to return to Earth in an uncontrolled manner, these tools could also be used to work out how much of a threat falling debris might pose to populated areas. Peter explains:

"We can verify whether the models predict the correct amount of shock radiation which adds to heating the surface. We can verify whether they predict correctly the surface temperature, whether they predict correctly the amount of material that is lost from the heat-shield during re-entry. And that determines the thermal protection design. You want to make your heat-shield as thin as you can because you want to take as little mass into space as possible at the start of a mission. And so the better you understand the behaviour of these systems, the more efficient you can make them."

You can follow the Hayabusa Re-Entry Airborne Observing Campaign by clicking here. The Eindhoven University of Technology, which has members on the DC-8, is also running a blog here.

Ambitiously, Peter's team is going to try to stream live video of the re-entry by bouncing video off an Inmarsat spacecraft. Go here to watch that. It should start running just after 1345 GMT.

As I said on Tuesday, Hayabusa represents an extraordinary achievement, whatever the outcome on Sunday. And if the Japanese manage to get the capsule down safely and find fragments of Itokawa inside, it will be quite a coup.

No-one has ever returned samples from an asteroid before.

Don't expect any immediate Eureka announcements. It could take several months of painstaking work back in the Sagamihara laboratory in Japan before scientists are able to confirm they have pieces of Itokawa dust.