'Zombie-sat' and the clever orbital dance

The "dead-but-alive" telecommunications satellite, Galaxy-15, has begun to enter the space of neighbouring craft, and their operators are planning evasive action. 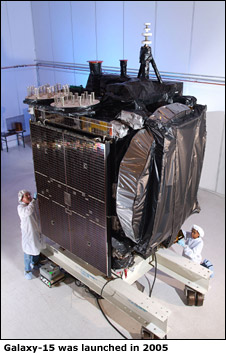 "Zombie-sat" has captured the imagination of the internet space forums these past few weeks. It's probably the nickname that's done it.

When we sit on the sofa skipping across the smorgasbord of channels with our remote-controls, we don't usually give much thought to the "bent pipes" that sit 36,000km above our heads, delivering the televisual feast.

Intelsat's Galaxy-15 satellite was put in geostationary orbit five years ago to re-distribute TV services to cable companies across North America, and also to send navigation data to aeroplanes to improve the accuracy of their GPS receivers.

But the "bird" experienced a major hiccup at the beginning of April.

It's not known precisely what happened. One possibility is that it was damaged by high-speed particles billowing off the Sun in a solar storm - an ever-present danger for orbiting electronics.

The satellite is still operational: it's still "on", but Intelsat cannot control it. Any signal it receives, it re-transmits at high power. It's a very unusual situation.

What doesn't help is the fact that Galaxy-15, which is supposed to sit at 133 degrees West (over the eastern Pacific), is drifting slowing eastwards by about 0.05 degrees a day. This will take it into the path of other satellites, and first to have an issue is AMC-11, another TV services spacecraft operated by SES World Skies.

If SES were to do nothing, Zombie-sat would soon start picking up and retransmitting signals sent to AMC-11. To users on the ground who depend on AMC-11 for their daily dose of MTV, this could lead to a horrendous mash-up.

It would be like trying to listen to two people who are shouting the same conversation at you.

So, SES World Skies will today begin a delicate orbital dance, in which they will allow AMC-11 to drift in tandem with Galaxy-15 while at the same time sneaking up another satellite behind the pair.

The plan is for the SES controllers to then leapfrog many of the services on AMC-11 across to this other satellite, known as SES-1, thereby minimising the disruption to customers.

"The closest AMC-11 and Galaxy-15 will come is measured in kilometres, and in space terms that's quite close. But the risk here is not one of collision; we're not at all concerned about that. The problem is that they're so close when viewed from Earth that it's not easy to distinguish between the two satellites and seeing as they both operate in the same frequency band, there will be interference if we're not careful.

"We've gone to a number of measures, including moving customers on AMC-11 on to a very large uplink antenna. This means we can very finely discriminate between the two spacecraft so that we can direct all of the energy into AMC-11 and as little energy as possible into Galaxy-15. If you don't put anything into Galaxy-15, you won't get anything out."

AMC-11 will eventually be moved back to its orbital slot to resume normal operations once the zombie has passed through, which should be 7 June.

All satellite operators and comms companies will have to work out what Galaxy-15 means to them. Here at the BBC, we've had to consider how some of our international services like the BBC World News channel might be affected.

This channel is fed through Intelsat's Galaxy-13 platform. The most recent calculations suggest everything should be fine.

Anyone sitting on their sofa in North America should be oblivious to the space waltz that is about to take place.

There are some wider issues, however. For satellite manufacturers, there will be keen interest in understanding exactly what happened to Galaxy-15.

Satellites have redundant, or back-up systems; and when they have major upsets, there are usually modes that will completely re-boot the spacecraft automatically after a period of time.

Galaxy-15 was made by Orbital Sciences, but Patrick Wood, the chief technical officer for EADS Astrium satellites, told me the entire industry had an interest in finding out what went wrong:

"Part of our design review process is to check through the architecture to ensure there isn't a single point that, were it to fail, we'd lose complete control of the spacecraft. Clearly Galaxy-15 has had a major event and most organisations will want to understand what happened. From an industrial point of view, the surprising thing is that Galaxy-15 is locked on full power. This tends to suggest the control/tele-command side of the spacecraft has failed and left the spacecraft in whatever mode it was in when it was last commanded. It's a very unusual case."

And, of course, the whole episode raises once again the issue of orbital space debris. Galaxy-15 will likely end its days in one of the two great "garbage patches" in the sky.

These libration points, as they are known, are located at roughly 105 degrees West and 75 degrees East. They are gravitational "sweet-spots" where drifting objects will naturally coalesce.

Satellite operators are urged to put their geostationary spacecraft in a "graveyard orbit" once their missions are complete. This usually means pushing the platforms even higher into the sky.

But of the 21 spacecraft which reached end of life in 2009, only 11 were disposed of in accordance with the Inter-Agency Space Debris Coordination Committee's (IADC) re-orbiting guidelines [99 Kb PDF].

We may all love our satellite TV, but we're starting to build a problem for ourselves.