So, we get down to the "first of the lasts". Friday's launch of the space shuttle Atlantis is expected to be the final outing for this particular orbiter before retirement. 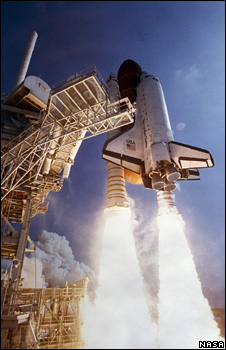 It won't go to a museum straightaway on its return from the space station, however. It will go back into the processing flow, as they say, and made ready as the "launch on need" rescue shuttle should November's Endeavour flight get into trouble.

As I've already discussed in this blog, there is some talk in the US as to whether having gone to the trouble of prepping Atlantis in this way, Nasa should just fly it out anyway.

The extra spares and supplies would be gratefully received at the station and were the ship to sustain damage itself - a holed wing on lift-off, for example - the small crew (just four individuals) could return to Earth in Soyuz capsules.

That's a decision for later in the year. President Obama still has to convince Congress that his new strategy for space exploration is the correct one and that the shuttle fleet should be stood down as planned.

Some politicians persist in trying to get orbiter operations extended, so nothing can yet be said to be a done deal

But the assumption of many is that this mission (STS-132) will be the last for Atlantis.

The commander on the flight, Kenneth "Hock" Ham, speaking for his crew put it thus:

"The six of us are calling this the 'first last flight of Atlantis' and I think that's appropriate because we really don't know what she's going to do next."

One man who would certainly like to see Atlantis make one further "last hurrah" is Jerry Ross.

During his astronaut career, he flew seven shuttle missions, five of them on Atlantis - more than anyone else. Naturally enough, he calls the ship his "favourite".

In a media conference last week, he listed some of the orbiter's key achievements and numbers, and it's worth repeating them here: