Listening for the 'birth cries' of black holes 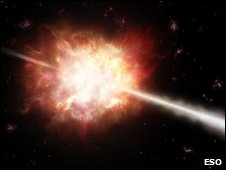 These events are detected in space every few days thanks to Nasa's Swift observatory.

The spacecraft sits above the Earth hunting for gamma-ray bursts (GRBs), the intensely bright but fleeting flashes of very high-energy radiation that can sweep our way from all points in the sky.

It's not just imploding stars that emit GRBs; colliding dead stars and black holes can also produce these high-energy "flashbulbs".

When Swift detects one, it swings itself to look directly into the burst with X-ray and ultraviolet/visible telescopes. It also sends out an alert asking other space and ground-based facilities to train their eyes on the event, to analyse the "afterglow" at many different wavelengths.

Launched in 2004, Swift has been a tremendously successful endeavour that has just bagged its 500th GRB (an event that has been given the not-so-catchy designation GRB 100413B).

It's one of those missions in which the UK has won for itself an important role even though in cash terms its contribution has been relatively small. 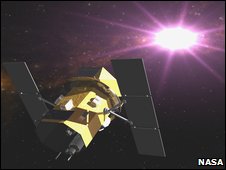 Just as with two of Nasa's recent Sun missions - Stereo and the Solar Dynamics Observatory - Britain has provided key bits of kit for Swift.

The X-ray camera and elements of the ultraviolet/optical telescope come from these shores. Indeed, they included spare parts left over from Europe's X-ray space telescope, XMM. How British is that?

Data processing and archiving is also done here, with much of the effort led out of the University of Leicester.

So what have we learnt from Swift? Well, the mission has certainly put some observational flesh on the theoretical bones.

There have been many uncertainties and mysteries surrounding GRBs since their first detection in the 1960s (the Americans initially thought they might be coming from secret Soviet bomb tests!).

Scientists like to talk about "long bursts" and "short bursts".

Long ones - those that last more than a couple of seconds - we're pretty certain now come from end-stage stars collapsing in on themselves to form black holes. The implosion of these beasts produces superfast jets of material that punch their way out of the dying star into space. Dr Julian Osborne from Leicester takes up the story:

"The gamma-rays are generally thought to be due to what are called internal shocks. You have a jet of material coming out of the star and this jet is supposed to be somehow stuttering, and collisions within the jet in the various stutters are thought to be the cause of the gamma-ray pulses themselves. It's like the 'birth cries' of the black hole, if you like. It's then the collision of that jet with the surrounding medium [beyond the star] that is thought to generate the afterglow - the much longer lived, days to weeks, X-ray and optical emission."

Short GRBs - ones that last less than a couple of seconds - probably have a more varied genesis.

Some may come from compact, super-magnetic remnants of dead stars known as magnetars. It's hard to envisage these objects. Think of something about the mass of our Sun confined in a space about the size of London with a magnetic field quadrillions of times more powerful than the Earth. Bizarre.

Another key source is probably the merging of other dead-star remnants (neutron stars). These are a key source for study now because their coalescence should be accompanied by the emission of gravitational waves.

Huge machines have been built to try to detect these long-sought ripples in the fabric of space-time predicted by Einstein, and every time Swift clocks a GRB, it alerts the gravitational wave hunters so they can look through the squiggly lines in their data for any hint of a signal.

Scientists hope GRBs might lead them to detect gravitational waves

One of Swift's great achievements, though, has been in pushing back our understanding of the really deep Universe.

This burst holds the record for being the most distant object yet seen in the Universe. Its flash covered a staggering 13.04 billion light-years to reach us.

If you consider the cosmos is about 13.7 billion years old, it means the star that produced GRB 090423 could have been among the very first to shine in the Universe. Julian says:

"The most distant objects known in the Universe are now gamma-ray bursts. It's these that really demonstrate the importance of GRBs for astronomy and cosmology, because they take us to an evolutionary phase in the Universe that we know very little about indeed. Identifying the most distant galaxies tells us about galaxy formation and the first generation of stars, perhaps. It's an era we struggle to see any other way."

Swift has a good few years left in it. It has no consumables onboard, no propellants or coolants that could run out. It runs the usual risks of course - its X-ray telescope has already been hit by a micrometeorite - but there's every reason to believe it can continue to function throughout most of this decade.

For the UK contribution too, there is optimism. Although UK Swift will get 20% less funding in future, it survived the recent cull in operational monies that support British involvement in several other high-profile missions: Cassini, Cluster, Soho, Venus Express, and XMM.

I blogged about this set-back for UK space science in February. However, I'm pleased to report that since that posting a possible solution has emerged which would see the European Space Agency pick up some of the UK costs of these missions. This should be confirmed in the coming months.