Methane on Mars: Esa and Nasa get down to business

After all the talk, it's now for real. Having spent most of last year working out how they could explore Mars together, Nasa and Esa posted their first Announcement of Opportunity on Monday.

It's a call to scientists to propose instruments for a satellite to be sent to the Red Planet in 2016. 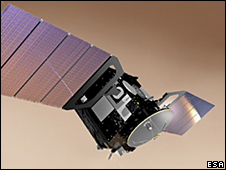 Europe will build it; the Americans will launch it. Researchers on both sides of the Atlantic will be involved in developing its sophisticated sensors.

The ExoMars Trace Gas Orbiter (TGO), as it is known currently, will circle the Red Planet looking for methane and other substances that might indicate the presence of life.

Methane at Mars is a really intriguing subject, not least because on Earth we know this gas to be associated with life processes.

The gas was first detected in the Martian atmosphere in 2003 by the Mars Express orbiter and by Earth-based observations.

Subsequent mapping has found it to be more abundant over particular parts of the planet. Its distribution seems also to come and go very rapidly, much faster than one would expect.

Some researchers have naturally speculated that its persistence is linked to the existence of microbes living in the near-surface layers of the planet.

Others think it much more likely the methane is produced by geological activity, from active Martian volcanoes or from a geochemical process called serpentinisation.

The latter occurs at low temperatures when rocks rich in the minerals olivine and pyroxene react chemically with water, releasing methane.

The TGO will try to get us nearer to solving some of these riddles.

The broad specifications for the satellite [4Mb PDF] have already been outlined by the space agencies.

It will have a dry mass (ie not including fuel) of about 1,000kg and carry about six instruments.

It will have some spectrometers that look straight down through the atmosphere; and others that look across towards the limb of Mars, using the Sun in the background to illuminate the entire atmospheric column.

The latter technique, so-called solar occultation analysis, has the potential to reveal gas concentrations in parts per trillion.

Of course, no orbiter would be complete without cameras - and the TGO will have the means to view a whole hemisphere at once to give context to its trace gas measurements, and a high-resolution capability to look closely at specific geological formations that might be associated with methane "hotspots".

So what happens if the TGO finds a really interesting source, one that cries out to be investigated by a surface robot?

Well, under the joint exploration programme, Esa and Nasa will send two rovers to Mars in 2018.

The Esa rover in particular will have a suite of instruments designed to test for microbes and it will even be able to drill two metres into the ground to find them. 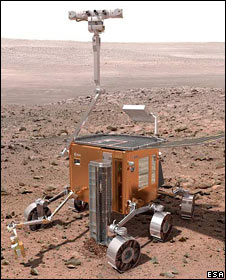 But the TGO information may make little practical difference to the targeting of the two rovers. And here's why.

The TGO will not get into orbit around Mars and into its science operations phase until May 2017; and assume also that scientists will need a year perhaps to make some sense of its observations.

This takes you into the time period when the two rovers will be launching.

Normally, their landing location (they will go to the same place) would have been selected by then.

A re-targeting would mean carrying out a new landing site evaluation, photographing the touchdown zone to assess whether it is safe.

It is something which has to be done carefully; it's not something you really want to be doing "on the fly".

What Esa and Nasa could do instead is prepare a number of landing options in the years ahead, based on the best available science, and then hope, when the TGO information finally comes through, one of the favoured choices turns out also to be a hotspot of high significance.

In other words, we may need a bit of luck if the 2018 rovers are to get to go to one of the most promising sites for life on Mars today.