No pressure there then, Mr Musk

He is the man of the moment - Elon Musk, the chief designer and CEO of SpaceX. 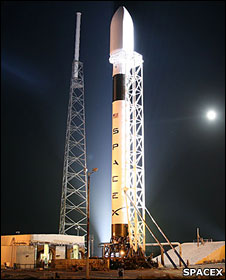 The guy can be forgiven for feeling a little stressed right now.

He admitted as much to the BBC when we went to see him at his Hawthorne, California facility last week. SpaceX is getting very close to the maiden flight of the Falcon 9 rocket, and Musk knows that the eyes of the world will be watching:

"On launch day, there is serious pucker factor."

For those who haven't been following this quite so closely, the Falcon 9 is probably the leading candidate right now to lead the commercialisation of low-Earth orbit.

Fitted with its Dragon capsule, the Falcon is being touted by many as the cheaper, faster, but no-less-safe alternative to Nasa's Ares 1 rocket.

The Augustine committee [7Mb PDF], commissioned by President Barack Obama to review US human spaceflight options, said private operators should be incentivised to provide the means of getting cargo and crew into space.

Augustine calculated that Nasa's Ares 1 and Orion capsule would launch for about a billion dollars a time. Elon Musk thinks his big Falcon - the Falcon 9 Heavy - will have a brochure price of just $100m, and possibly substantially less. That's quite a difference. 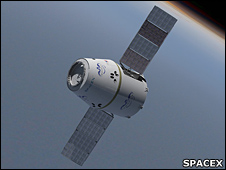 Of course, until it flies, Falcon 9 remains, as the popular phrase puts it right now, "a paper rocket". A successful first demonstration, though, would make everyone sit up.

You can hear Elon Musk's thoughts on where he thinks his company is right now on this Friday's Science In Action programme on the BBC World Service.

Musk takes us on a guided tour of his 50,000-sq-m factory at One Rocket Road. We hear how the two-stage rocket is put together and the milestones he's hoping to reach:

"I think launch is in the February or March timeframe, so although all the pieces [of Falcon 9] will be [at Cape Canaveral] this month, there's still activity to be done in terms of de-bugging the interaction between the rocket and the launch pad.

"We're going through final check-out; we're being very paranoid about everything - double- and triple-checking all the systems in the vehicle, and going through the final regulatory approvals." 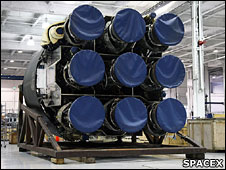 Falcon 9 is a two-stage vehicle powered by kerosene and liquid oxygen.

The "9" refers to the cluster of nine Merlin engines at the base of the first stage.

These should offer a high degree of redundancy. Musk says the rocket will be able to cope with the failure of two of these engines in flight and still complete its mission.

The schedule ahead is a tight one.

The first flight will demonstrate that the Falcon is the real deal. The second flight will be mostly about the Dragon capsule and its competence - its manoeuvrability and its ability to return safely to Earth.

The third flight is expected to deliver cargo to the International Space Station. 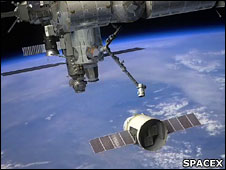 Everything, though, has been designed with the intention one day of carrying astronauts. How soon that might happen will depend to a large degree on President Obama and the view he takes of the Augustine report.

But Nasa itself will have a big say. Even before Augustine, it was seeding the future through its Commercial Orbital Transportation Services (Cots) programme.

"We're very close partners and I'd like to say that we really wouldn't have come this far or this fast without both the financial help of Nasa and some of their guidance."

That first Falcon 9 flight is going to be quite a show. Watch this space.