You are going to hear a lot in the next few weeks about Virgin Galactic, not least because on 7 December the company will unveil SpaceShipTwo in the Mojave Desert, California.

This is the rocket plane Sir Richard Branson will use to take fare-paying passengers on sub-orbital flights in the coming years.

In this posting, however, I want to concentrate on another Galactic project which is now gathering pace - the LauncherOne satellite system. 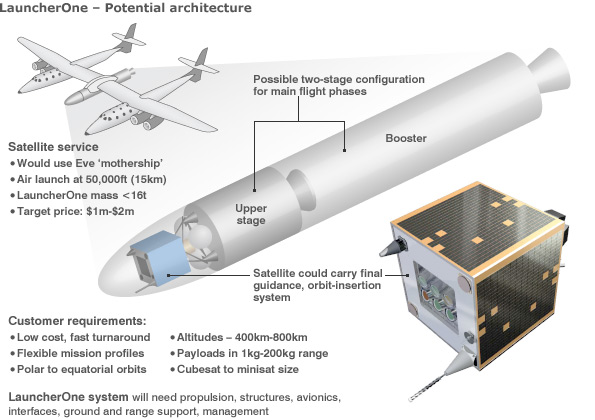 Back in January, I reported on early discussions between the Branson outfit and Surrey Satellite Technology Limited (SSTL) in Guildford.

SSTL is a world leader in the production of low-cost small satellites, and it was keen to explore the possibility of working with Virgin Galactic on a way to get these spacecraft into orbit much more cheaply than is currently possible.

The concept would be somewhat similar to the US Pegasus system, which uses a former airliner to lift a booster to 40,000ft, before releasing it to make its own way into space.

Virgin Galactic's aim is to provide an air-launched system which is faster, cheaper, and more flexible.

It would use SpaceShipTwo's mothership, "Eve", as the launch platform.

Dr Adam Baker, then at SSTL, was hoping for some money from the UK government to do a small feasibility study. The hope was that if things came together, LauncherOne could be a UK-built rocket despatched by Eve running out of a British airport somewhere.

Well, the money wasn't immediately forthcoming and Dr Baker has now moved across to Virgin Galactic to lead its own in-house efforts to give the project momentum.

So where are we? Dr Baker has been in post little more than a month. He's speaking to anyone and everyone, from those who might be interested in helping to build such a launcher to those who might want to use it to put a payload into orbit.

At the moment, companies like SSTL are in a less than satisfactory position.

They often have to wait on the availability of converted Soviet-era missiles, such as Dnepr. This can add months to the timeline of a project.

Sometimes, the launches can get bumped by "more urgent" Russian military payloads, or have to wait while a problem on a satellite co-passenger is resolved (small satellites on a Dnepr are launched in batches).

The issue for LauncherOne, of course, is cost.

At the moment, a small satellite wanting to get into space may have to pay something like $5m-$10m. Virgin Galactic really has to get that down to $1m-$2m for this venture to make financial sense.

And to make that happen, Dr Baker believes the development cost of the rocket to first flight also needs to be kept the right side $100m:

"The less we can spend developing this, the easier it is going to be to recoup the cost, and the lower the launch price can be.

"Historically, rockets that have been developed from scratch have cost a lot more than $100m. We want to take as much advantage from all the previous 50 years of effort in designing launch vehicles to get the best from the market."

The British imperative is still there. If this vehicle can come out of the UK, so much the better, says Dr Baker. He'd love nothing better than for LauncherOne to be a UK-led initiative. But Virgin will not be overly sentimental about this. It's a business.

Interestingly, feasibility studies have been done in this field before in the UK, including on the possibility of using a Vulcan bomber as the platform for an air-launched satellite service. At least one small assessment has found the economics don't stack up.

Who'd have thought before Brian Binnie and Mike Melville made their historic flights in SpaceShipOne that trips on a civil spaceliner would soon be possible?