Does this man remind you of anyone? 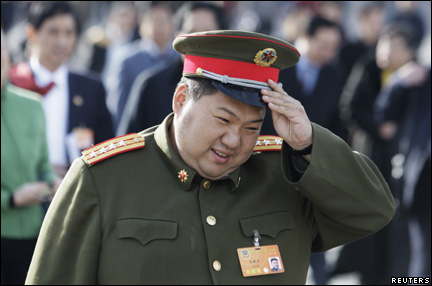 This is Mao Xinyu, the 38-year-old grandson of Chairman Mao.

Grandson Mao is a senior colonel in the People's Liberation Army. He's now become well-known here as a blogger. The readers of the People's Daily online have just voted his blog the most popular of the last year.

Mao's blog is largely dedicated to an appreciation of his grandfather, who died when he was six years old. The founder of communist China is still admired by many people here - despite the fact that millions died because of famine and conflict during his rule (an official Communist Party verdict delivered after his death ruled - with precision - that Chairman Mao was 70% right and 30% wrong).

"The greatest happiness of my life and satisfaction come from a real understanding of a great man. And he is my grandfather," grandson Mao writes.

In an interview, grandson Mao leaves no doubt about his feelings...

Q: You have said that your grandfather is god; is he a perfect man to you?
A: Yes.

Mao Xinyu's resemblance to his grandfather means that he tends to get stopped whenever he goes out in public. Last March, I watched him try to make his way to a political conference at the Great Hall of the People in Beijing, held just a few metres away from his grandfather's mausoleum. Grandson Mao had to stop every few steps to pose for pictures with delighted Chairman Mao fans (my own attempts to speak to him didn't go so well - he ran down the steps of the Hall to avoid doing an interview). Enjoy his blog.