Hello again. Just back in China after a bit of time rummaging around Cuba. Although I was there as a tourist and not in any formal reporting role, I hope the Cuban authories will allow me to share some thoughts.

I decided to go there for a simple reason...

These five survived the fall of the Berlin Wall and the collapse of the Soviet Union - in effect, they are the remains of the movement that once threatened to dominate the world.

So, after having spent the last two years living in Communist-ruled China, I was curious to see what life was like in another Communist-run country. At the very least, I thought I could sing the Internationale and wave a hammer and sickle if I got into trouble.

There are plenty of similiarities... 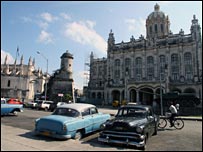 The Chinese Communists came to power in 1949, the Cubans in 1959. Each revolution followed a strikingly similar path. Both were led for many years in the wilds by a charismatic leader - Mao Zedong in China, Fidel Castro in Cuba. The legend around each leader was built on a semi-suicidal manoeuvre - the Long March for Mao, the attack on the Moncada Barracks for Castro. Each man carried out his revolution against a regime portrayed as brutal and corrupt (the way museum exhibits in Havana condemn the indulgences of the ousted leader Fulgencio Batista reminded me of the way China routinely condemns the way the Dalai Lama used to live in Tibet).

After each revolution, each set of losers set up camp on the other side of a narrow strait directly facing their homeland - Chiang Kai-shek took his supporters to Taiwan, and Batista's supporters formed an exile community in Florida. These respective straits became sources of military tension for decades.

When you wander about Cuba, you tend to bump into things that remind you of China. On many streets there are signs for the local "Comite de la Defensa de la Revolucion" (Committee for the Defence of the Revolution) - the local neighbourhood organisation that keeps an eye on people's lives, similar to work units in China. Each party has managed to stay in power because of its ability to make its presence felt on every street, and in every house.

Both Communist Parties see themselves as instruments for social (and ideally moral) betterment. In Havana I came across signs encouraging alcoholics to get help at meetings. In one village I read a notice telling people to neuter their dogs. And then, there are the slogans - sayings from Castro and from Che Guevara printed on walls and placards across the country. Add this to what you find in China, and it's unlikely you can walk more than a few yards in either country without coming across wise words from your leaders (if you haven't been to a Communist country, it's a bit like seeing the Ten Commandments and the sayings of Churchill stuck all over Oxford Street).

Each state cultivates a strong sense of national pride and is sustained by the view that its enemies are out to destroy it. In Cuba, the enemy is the United States (a sign on the semi-finished motorway outside Havana says that the road would be finished quickly, if only the US ended its blockade). In China, the enemy is a West apparently keen to keep the country down and go back to the days of 19th century colonialism. But, this need for an official enemy doesn't always filter down to ordinary people - I've found ordinary Cubans and Chinese people to be incredibly hospitable to visitors.

Neither state tolerates any kind of political dissent - nor does it see any immediate need for general elections. The revolutions that brought each party to power are treated as never-ending mandates - no need for the trouble of a popular vote since the revolution is viewed as a permanent popular verdict.

Those are the similarities. But the differences are just as striking...

Cuba looks like it's stuck in 1959 - with old cars and crumbling buildings. China often looks like it's decided to skip ahead to 2059 - with a set of dazzling skyscrapers, stadiums and airports. 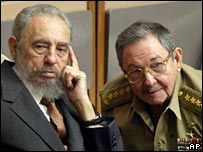 Cuba is still run by the men who carried out its revolution (Fidel Castro's younger brother Raul Castro is the president; Fidel himself still pops up regularly in his new job of newspaper columnist). These are men who work under a US embargo, who have not dramatically changed their ideology in half a century.

But China is run by its fourth generation - men who are several steps removed from the original revolution. These are men who do business with the entire world, who have inherited a system which traded socialism for capitalism a generation ago.

Both countries once tried to export revolution. But now China prefers simply to export goods.

Cuba is still a socialist country. It takes great pride in its free, well-developed education and health care systems (every few blocks in Havana you tend to run into a public health clinic.) China used to have free public services - but gave them up when it introduced market reforms in the 80s. As a result, many now believe that China is now one of the least socialist countries in the world. Tens of millions of migrant workers in China have no health care (a fact that worries the government which has promised to bring back free or affordable services.)

Cuba is still a noticeably poor country - I came across long queues for bread, and people still use ration books to buy food (one woman took me through hers, explaining how much rice she was allowed to buy every month).

By contrast, parts of China are staggeringly opulent. There's an international sportswear shop in Beijing that sells NBA jerseys and Chinese Olympic uniforms - rows and rows of goods perfectly displayed over three floors. I went to the equivalent shop in Havana - a bunch of shirts were crammed onto racks in one room. I asked if I could buy a Cuban Olympic uniform but was told that they'd run out a long time ago (ordering any more didn't appear to be an option).

To get rich in Cuba you have to leave the island. But, in China you can get rich in your homeland.