If the Chinese Communist Party is looking for a house band to play at one of its next study sessions, Guns N' Roses latest album probably won't be on the list. Chinese Democracy, you can be sure, will not be uploaded onto official Politburo iPods. 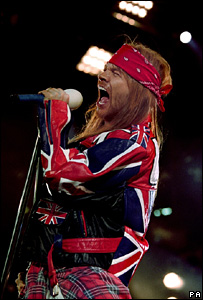 One newspaper editorial here says that the album venomously attacks China. When we mentioned the new album in a Chinese internet forum, the administrator quickly deleted the reference. The record hasn't been released in China - unofficially we've been told this is because the material is too sensitive. The album's official website Chinesedemocracy.com has also been blocked.

The Chinese government prefers a different kind of music. Before its press conferences, the Foreign Ministry in Beijing plays generically unthreatening acoustic guitar music over its loudspeakers. I asked the spokesman, Qin Gang, what he made of the new Guns N' Roses album.

"According to my knowledge, a lot of people don't like this kind of music - because it's too noisy, and too loud. James, I think you are a mature adult, aren't you?" he said (with what seemed to be a definite half-smile).

But if you look around a bit, you can find something even louder and more provocative than Guns N' Roses. 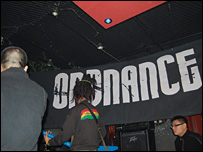 In a small bar on the Pacific coast, a Chinese heavy metal band called Ordnance perform their new album. The four band members perform with their backs to the audience of 40 or 50 people. Their songs go just as far - if not much further - than Guns N' Roses. The band attacks the Chinese police for not defending ordinary people, they criticise corruption and oppression in their own country.

"Take pride in freedom of speech," the band sings, "take pride in guaranteeing human rights, Take one party dictatorship as a disgrace."

This small band singing in a small bar can get away with saying things that would never be allowed anywhere else in this country. I wonder what they think of the American band thousands of miles away also singing about China.

"Guns N' Roses are in the US - they have never lived in China," says Ying Peng, the band's lead singer, "They don't really know what China is really like. They try to understand it in their way, but it's one-sided. I may like the music, the melody. But for lyrics, everyone thinks differently, and stands on a different side. It's a different place, different culture."

"If they came to China to tour, what would you say to them?" I ask.

"Though we're not on the same level band, we have the same spirit," says the guitarist Liu Li Xin, "The rebellious spirit is the same. We try to discover problems in societies. We respect Guns N' Roses, because they took notice of China's democracy. For that, they deserve our respect. But we do have the same attitude and spirit, hoping to make China better."

In the end which band will have the greater impact on China? The Americans performing in stadiums outside China? Or the four men in their own country yelling out their own concerns to their own people?