Can two weeks and several bagfuls of gold medals change the way an entire country sees itself? 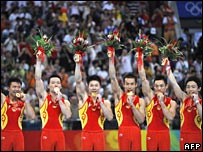 I've written here before that China often sees itself as a victim. Generations have grown up learning about this country's century of humiliation - how the West and Japan once bit chunks out of China, and how they still want to keep China down.

But does China now have to get a new national story?

The success of the Beijing Olympics may make China reassess its belief that it is a victim. It may also have to re-think its view that the West is determined to stop China from retaking its rightful place as a world power.

• Everyone has come to Beijing. 205 nations were invited to compete at these Games - and 204 showed up (Brunei managed to get its paperwork in a muddle and failed to register its athletes on time). So, there were no boycotts. The most important world leaders even came to the opening ceremony as well (one of the only ones who didn't, Gordon Brown, has now arrived in Beijing for the closing ceremony).

• China is winning more golds than anyone else. Before the Games, China played down its gold medal chances - saying that it was just a minor, second-rank, developing country which would probably be annihilated by the sporting powers of the world (and would be lucky to rub two bronzes together, that kind of thing). But, in the end, it's come out ahead. So, the next time that China plays down its chances, no-one will believe a word.

In the end, it's pretty hard to carry on feeling like a victim when every country on earth comes to your party and proceeds to watch you win.

"Now we can say goodbye to our image as the sick man of Asia," said Shen Ming, a Chinese fan watching the final of the women's beach volleyball told my colleague.

"Hosting the Olympics means that China's power has grown," said Hao Ning at the final of the men's springboard diving (which China won).

On to the next question then. What does China do when it no longer feels picked on by the rest of the world?

Here are the most outlandish fears of the lying-awake-at-night-worrying-about-China club (slightly exaggerated for effect): China will go ahead and conquer the world, raise the red flag over Big Ben and the Eiffel Tower, and make the rest of the world come to Beijing every once in a while to prostrate themselves and generally grovel in a humiliating way.

China says that no-one has to worry about anything like that. People here tell me they just want to be respected and taken seriously as equals - nothing more.

What do a billion people do when their country finds its confidence?