There are 205 teams competing at the Olympic Games. But only 192 of these are from countries represented at the United Nations 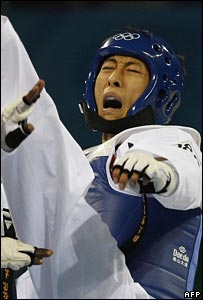 Ten of these are Caribbean or Pacific islands (American Samoa, Guam, Puerto Rico, US Virgin Islands, Bermuda, British Virgin Islands, Cayman Islands, Aruba, Netherlands Antilles, Cook Islands). None of these islands are independent, but they are allowed to compete in their own right in Beijing.

Palestine isn't independent, but it wants to be - and it gets to compete at the Olympics. Hong Kong competes on its own as well (it got to keep its own Olympic team even after the territory returned to China in 1997).

This morning, in Beijing I got to watch Taiwan/Chinese Taipei's best gold medal hope - Chu Mu Yen (a taekwando fighter who has the fearsome nickname "The warlord of Taiwan").

The Beijing crowd cheered loudly for him as he walked in for his first fight (on the grounds that they feel that he is as Chinese as they are). A handful of fans even waved the Chinese Taipei flag.

But no-one raised the actual red and blue flag of Taiwan itself (that would have broken Chinese and Olympic rules - section D of the regulations posted outside Olympic venues says that spectators are not allowed to bring in "flags of non-Olympic and Paralympic participating countries/regions"). So, no Taiwan flags are allowed (for that matter no English, Scottish or Welsh flags are allowed either - since the UK competes as one nation under the flag of the Union Jack).

Chu Mu Yen clearly enjoyed the crowd's support - since he demolished his competitor from Kenya (and made me understand why he's known as the warlord of Taiwan).