I got home stratospherically late last night (an entirely routine event when your headquarters - London - is seven hours behind local time.) Still, it meant that I could watch the lightning strike across the city while everyone else was asleep. 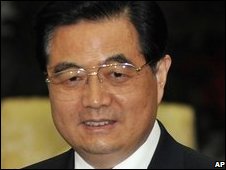 Then the rain came, and this morning the city's air was sparkling and clear. Our PM10 reading was 8 micrograms per cubic metre (the lowest level we've had so far.) This is the kind of day that Beijing would like to photocopy and reproduce when the Olympic Games begin at the end of next week.

Whatever the weather turns out to be, people here probably won't blame China's top leaders if things go wrong.

One of the most striking things for me - in my year and a half in China - is the widespread popular belief that China's principal leaders are benevolent and that the main problem is that their subordinates simply fail to carry out their wise orders properly.

A few comments from this blog...

Fairreport:
"I think the high rank officials like PM and President are very good, but the lower, local officials are completely corrupted."

Endyjai:
"My friend is from Sichuan, she knows lots of people outside of Beijing who were compensated well, and even to the extent that people say they are over compensated. There shouldn't be violent evictions and local governments are to blame. Let's hope the central government can get rid of these guys."

Redtibetan:
"There are many officials in central government who are willing to solve the Tibetan problem but few local officials always put hindrances on the path for their benefit."

KennethWu:
"I think this is more to do with the disgusting attitudes of corrupt local officials rather than the current laws within china.
The illegal and corrupt actions of a few cannot be viewed as the actions of the majority.
This is one of the problems with china, the central government can't be every where at the same time, and when the central government's attentions are away, then sometimes people use more power than they actually have."

The popular belief that China's leaders in Beijing are well-meaning - but unable to stop all local abuses - has a direct impact on the job that the foreign media does in China.

Many Chinese people, who find themselves in trouble, want to talk to us because they think that if their case is made public, China's top leaders will get to hear of their problems and will then step in to ensure that justice is done.

Parents whose children died in the Sichuan earthquake in May sought us out and spoke to us of their hope that the central government would help them. Many had an unshakeable belief that Hu Jintao and Wen Jiabao would bring them justice (even after the central government itself instructed the Chinese media not to cover the parents' protests.)

The Yu family invited the press to their house in Beijing earlier this month just before it was knocked down. They'd posted pictures of Hu Jintao and Wen Jiabao all over their house - and spoke of their hope that these leaders would step in and help them to get a better compensation offer (as far as we can tell, they didn't.)

This concept - that the leader is just - is a hard concept for a foreigner (ie - me) to fully understand. In the West, we're used to blaming the person at the top if things go wrong (as Gordon Brown can probably confirm). But, here in China, it's the reverse - you blame the people at the bottom, not at the top.

To explain it, I'm calling in a bit of help from a couple of fellow foreigners - who've been writing about China for a lot longer than I have.

"Fortunately for Beijing, farmers tended to blame the local leadership [...] clinging to the traditional view that if the 'emperor in the capital' were properly informed of their plight, he would wield a magic wand to help them."
(p273 "The Changing Face of China")

And a fairly direct point from Jasper Becker, talking about some Chinese intellectuals (which some may disagree with):

"Past horrors and mistakes do not seem to have weakened a servile belief in the ultimate benevolence of the state and a willingness to grant it unlimited powers."
(p245 "The Chinese")

So, the belief in a wise ruler at the head of a noble, but imperfectly implemented system goes back a long time - and hasn't gone away.

The entire system of petitioning (whereby ordinary people with a grievance are allowed to come to Beijing to petition the central government to hear their case) is based on the ancient premise that the leader in the capital may bring you justice, if only he gets to hear your case.

Here's where it gets tricky for an outsider to understand:

We recently reported on some footage filmed in a village in the province of Shandong that showed a man being kicked in the head as he was resisting an eviction (his family home was being knocked down to make way for a new development.) The allegation was that the eviction was organized by the local Party chief and some hired thugs. Comments posted on the Internet blamed the local Party chief for the violence - one netizen wrote that he hoped Hu Jintao would find out about it and punish those responsible.

But what was noticeably absent from the discussion that I came across was any questioning of the fact that Hu Jintao himself is responsible for a system that allows local officials to accumulate such power that the officials can hire thugs to kick people out of their homes (I am not remotely suggesting that China's president wants innocent people to be kicked in the head - I am simply saying that his government is ultimately responsible for the system in which these abuses happen.)

So far, the central government in Beijing has not allowed the creation of independent institutions (an independent legal system, a free press, independent trade unions) which some believe might operate as a check on the power of local officials - and which might prevent further abuses in the future.

You do meet some people in China who criticize the entire Communist structure and those who keep it going - but not very many. In this country, if you start to blame the system itself - and the men right at the top - you tend to get into all kinds of trouble.