Recently, I asked whether or not the openness the Chinese authorities displayed in the immediate aftermath of the earthquake would continue. Now, after a day spent in the city of Dujiangyan trying to cover a story about bereaved parents, I can try to answer that question more fully.

First of all, some background. Perhaps the most devastating story to come out of the earthquake is that of the thousands of school children who were killed when their schools collapsed. In Dujiangyan, more than 200 children died when classrooms at the Xinjian primary school fell down. The school was the only building in its area to collapse. Bereaved parents believe that it fell down because it was poorly built - they want the government to punish those responsible. The government promised it would do so. 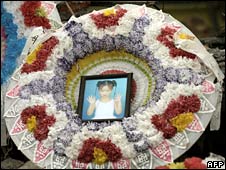 On 1 June, the government allowed the bereaved parents to hold a memorial service at the remains of the school. The parents invited reporters from the Chinese media and the foreign media to attend - several dozen of us did so. The government left us all alone. We all reported on the parents' loud demands for justice. At the time, it was tempting to see the government's tolerance of the parents' campaign as proof of a new, more open China in the aftermath of the earthquake.

But after this, things started to change.

Early last week, sources tell us that the Chinese government instructed the state-run media not to cover the parents' campaign anymore. (This is a standard measure the government uses to end coverage of any story it deems harmful to social stability or the national cause.)
So, the parents' campaign was shut out of the state-run media. But the government doesn't have the power to tell the foreign media which stories it can and cannot cover.

Earlier this week, my colleagues and I flew down to Sichuan province to report on the parents' campaign. Temporary rules in place since January 2007 for the Olympics allow the foreign media to travel anywhere in China - except Tibet (previously we had to get permission from provincial authorities anytime we wanted to leave Beijing). As soon as we got to Sichuan, we had to register with the local government - in exchange for earthquake press passes which have been made compulsory for foreign reporters.

On Thursday morning we picked up on the parents' campaign. We heard that some of them were trying to get back into the Xinjian primary school. They said they wanted to grieve inside the remains of the school exactly one month on from the earthquake. But a line of police officers stopped many of the parents from getting in (some managed to get through before the police arrived).

My colleagues and I drove to Dujiangyan. When we arrived, one of my colleagues got out of the car to find out what was going on. She walked towards a small crowd of parents standing next to a line of police officers. My colleague was quickly spotted by plain clothes police officers and detained. She was taken to a government building where she counted five more reporters being held (each worked for a foreign media company). 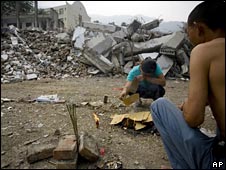 It's worth going into a bit of the detail of the next bit - since I want to show you how the system works.

The police told my colleague that she was being detained under article 2 of the rules printed on the back of our earthquake press passes.

Article 2 says the following (this is our translation from the original Chinese): "When conducting interviews, journalists must obey the relevant rules or regulations issued by different levels of headquarters for earthquake relief and reconstruction work."

The police told my colleague that the relevant rule in this case was this: the earthquake relief headquarters had decreed a period of traffic control. This temporary security measure meant that journalists were not allowed in the city (even reading this now I'm not entirely sure what it means - but my colleague made a point of noting it down accurately at the time to get it exactly right).

Another reason was offered as well. The police told my colleague that there was a danger of further aftershocks in Dujiangyan, so reporters should leave for their own safety. (This explanation was a little hard to believe since we came across cafes by the side of the road full of people relaxing with little apparent worry of being caught in an aftershock.)

"This is not censorship," one officer insisted after going through all the above reasons.

My colleague was released after 45 minutes and advised to leave the city straight away. Later on, we managed to meet some of the Xinjian primary school parents outside Dujiangyan city.

They told us they were deeply demoralised by their confrontation with the police. One mother showed us some fresh bruises on her arm - she told us she got them when the police dragged her away from the school (she'd been trying to pick up her son's photo). One father shouted angrily that all he'd wanted to do was honour his son. Another father said that he believed the parents' chances of achieving justice were now almost nil.

We have been able to tell their story. But the authorities here have made it increasingly hard for us to do so.

Back, then, to the original question: will the openness the Chinese authorities displayed in the immediate aftermath of the earthquake continue? In the case of the bereaved parents, the answer is becoming clear.