Has the euro turned a corner?

Suddenly it's spring time in the eurozone. The dangerous winds that threatened the single currency have subsided. The icy disdain from the bond markets has receded. Or so it would appear.

Ministers and officials have suddenly shed their nerves. The German Finance Minister, Wolfgang Schaeuble, says "I don't expect that there will be further major shocks". The French Finance Minister, Christine Lagarde, declares "the euro has turned the corner".

Even the Chief Executive of Barclays Bank, Bob Diamond, says the question of whether the eurozone will stay together is last year's story and "off the table".

It certainly helped that China told a visiting EU delegation in December that it would support the euro by energetically buying European bonds.

Although oft-repeated, it has clearly also helped that France and Germany have co-ordinated their defence of the euro. President Sarkozy was animated when he said in Davos "Mrs Merkel and I will never - do you hear me, never - let the euro fail".

The German chancellor in turn stepped up to say that the euro is much more than a currency, and "if the euro fails - Europe fails". 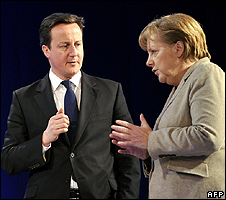 But determination is not a policy. What has made the difference is a perception that Germany is working on a comprehensive package to solve the crisis. It expects to have this ready to present to the European Council by March. It helps, too, that the package is of German design.

When I interviewed Mr Schaeuble last year he said that Germany did not want to be in a position of lecturing others. Maybe, but in exchange for German support there will be a teaching moment!

Now this package is being called a "grand bargain". Much of the detail is still being discussed. There are differences within the German cabinet and between eurozone countries. However, a broad outline is emerging.

Germany will agree to increase the lending power of the main bail-out fund (the EFSF) so that it actually reaches 440bn euros. It will be used more flexibly, including perhaps buying up bonds. Greece and Ireland could be given more time to repay their loans, and at a lower interest rate than at present. Some senior bankers have suggested the loans not maturing for 30 years.

In exchange, the rest of Europe will have to become more like Germany. It could be that the retirement age across the EU would have to go up. A benchmark would be agreed. A debt brake might have to be written into national legislation (perhaps at no more than 60% of GDP). Tax rates could be harmonised. All in all, tougher discipline over tax and spending would both be demanded and enforced.

Chancellor Merkel defined the bargain like this: "solidarity and competitiveness are two sides of a European coin". In other words, solidarity will come at a price. Other countries will have to become more competitive.

There is much to be argued over. Will Germany actually agree to a lowering of the interest rates that Ireland and Greece pay for their bail-out loans? That would be controversial within Germany. Will Greece be allowed to buy back its debt at a discount which would be restructuring by the back door?

If Greece and Ireland are given more time to repay their debts, how can that be done without appearing to let them off the hook? Would countries like Italy, for example, agree to the EU setting debt limits? Will the so-called "grand bargain" allow for some debt restructuring and for some actual fiscal transfers from countries like Germany and France? The answer is we don't know.

Even with all these plans and some structural reforms it will prove a hard road for some of Europe's weaker economies to regain competitiveness. Ireland has slashed its growth forecast for 2011 to 1%. It had previously estimated 2.4%. In other countries like Spain growth is flat. How long will these economies take to recover and will the voters accept a reduction in the services that the state can provide?

And if competitiveness proves elusive then will the "grand bargain" evolve into rolling support for the eurozone's peripheral countries? For the Germans that could sound like the much-feared "transfer union".

Amidst the generally good spirits in Davos, the head of advertising group WPP, Sir Martin Sorrell, assigned Europe to his third division. Germany was in the second. He still saw a Europe in the economic slow lane.

It is a reminder that although the eurozone crisis may have eased the most fundamental question of all has to be addressed. How will non-German Europe find growth? Almost every day I receive e-mails from business groups who question whether the EU is on the side of innovation, whether it favours reducing regulation, whether it actually will open up markets and allow new businesses to bloom.

Has Europe turned a corner? Watch the growth figures.