I digress from Europe. I was going to reflect on the torrent of words that cascaded from Davos, but I have been distracted by the events in Egypt. I will return to what we learnt from Davos in a couple of days.

The turmoil in Egypt is likely to be concentrating minds at an EU foreign ministers' meeting on Monday.

Some observers are drawing parallels between the protests in Cairo and the revolution that overthrew the Shah in Iran in 1979. Iranian leaders are calling the uprising in Egypt "the revolution of the noble".

I got caught up in the tail-end of the Iranian revolution. President Mubarak is not Mohammad Reza Pahlavi. There are many differences between Iran and Egypt, but it is worth re-reading notes from an earlier revolution.

Back then I watched Washington's agony; to abandon their ally or to stick with him. They could not even decide whether to give him hospital treatment. To this day they live with the consequences of their support for the Shah.

Once again you can detect acute anxiety from the White House over the events in Egypt. President Obama is being briefed several times a day. This time the Americans have distanced themselves from President Mubarak. They have spoken out in favour of reform and universal rights. But will it prove too late? Will America be branded the backer of a tottering authoritarian regime and so see its influence in the Middle East decline? 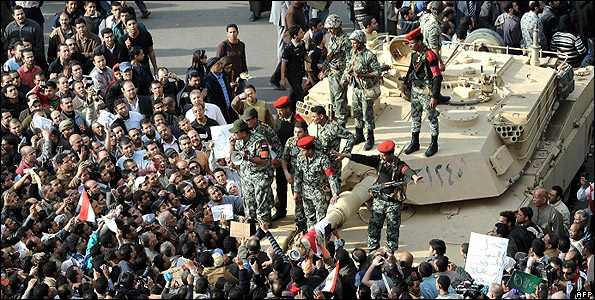 An authoritarian regime depends on fear. A security machine can appear all-powerful, all-seeing, all-knowing. But, in the face of a popular revolt, can disintegrate swiftly. The sheer numbers on the streets of Cairo have given people a sense of their own power. Their fear of the regime has gone.

One of the best books on the Iranian revolution was written by Ryszard Kapuscinski. In Shah of Shahs he describes the moment when a regime becomes vulnerable.

"The policeman shouts, but the man doesn't run. He just stands there, looking at the policeman...he doesn't budge. He glances around and sees the same look on other faces. Nobody runs though the policeman has gone on shouting. At last he stops. There is a moment of silence. We don't know whether the policeman and the man on the edge of the crowd already realises what has happened. The man has stopped being afraid - and this is precisely the beginning of the revolution."

In Egypt that moment came when the police tried to disperse the crowds and failed. Shortly after they melted away; they had not the heart to face the people down. In such circumstances authoritarian regimes have a few choices. They can try making concessions or order troops to fire on unarmed demonstrators.

It has been said before that the most dangerous time for an authoritarian regime is when it begins to reform itself. When President Mubarak asked his cabinet to resign it solved nothing. It was seen as a sign of weakness. The crowd want his resignation and is unlikely to be satisfied with less because it has tasted its own strength.

Military force can succeed. It ended the protests in Tiananmen Square in China. A sudden, brutal use of violence can reinstate fear. But sometimes, as happened in Iran in 1979, the people continue to protest even though thousands have been killed. Gradually soldiers lose the will to fire on their own people and the revolution succeeds.

In 2009 in Iran, after the disputed elections, the protesters never lost their fear. And crucially the regime never blinked. The Basij militia and the Revolutionary Guards never showed uncertainty. And the so-called green revolution was crushed. If some units had refused to turn on the protesters the outcome could have been different.

In Egypt the protesters have tried to befriend the soldiers. They have ridden on some of the tanks, trying to enlist the men as protectors of the Egyptian people. In other revolutions the crowds have placed carnations in the barrels of the rifles.

Ultimately the military will decide the outcome of these events. If Egypt descends into anarchy then the soldiers could present a clamp-down as defending the people. But so far the army has seemed reluctant to confront the protesters. They will know that some of those on the streets are their brothers, sisters, family and friends.

If the military decides it can't use force then it may fall to the generals to tell the leader his time has passed.

As a regime sees its authority crumbling it often tries to negotiate, to identify a "moderate" opposition leader it can talk to. The hope is that through such compromise some of the old order can be preserved. In Egypt Mohamed ElBaradei may emerge as the negotiator. But in revolutions such figures often only hold the ring for a short time.

In Iran in 1979 Shahpour Baktiar became the prime minister and offered free elections. He was swept aside by supporters of Ayatollah Khomeini. One of the traits of a revolution is that the true winners often emerge only later.

Ryszard Kapuscinski noted how quickly the optimism and hope of an uprising can disappear. A revolution, he wrote, "demolishes so ruthlessly that in the end it may annihilate the ideals that called it into being". It was not that way in Eastern Europe. The people yearned for civil society and to belong to the West. The communist regimes were tired. Even the apparatchiks no longer believed in the party line.

In Egypt these are days of rage. Inchoate. Leaderless. No one knows what the mob will settle for, what society they want. There is a dangerous vacuum.

Soon after he returned to Iran I remember seeing Ayatollah Khomeini in the holy city of Qom. I wrote about it later.

"Through the outstretched arms I saw one of the most famous faces on the planet; the man who had launched a revolution which would be as far-reaching as the Soviet revolution sixty years before... it was like seeing Lenin in 1918. I just wanted to study this man who was shaking the world. His face was expressionless. He saw the crowd but never acknowledged it. He just stood there with a forbidding glare. Dark beetle brows under a black turban. I never saw a trace of a smile and neither was it expected. The men around me wanted an ascetic. The sterner the face the more they trusted him....."

I recall in Iran meeting protesters who wanted freedom. Some were liberals; some were Marxists; some were students who just hated the gilded corruption of the Shah. They had battled on the streets, faced the tanks, but finally they lost ownership of their own revolution.