The row over the Roma

Arguments over the expulsions of the Roma from France have overshadowed a European summit in Brussels. There was a fierce row over lunch between the French President Nicolas Sarkozy and European Commission President, Jose Manuel Barroso.

The French leader accused the Commission of having wounded France: "I am the head of state, I am the French President and I can't let my country be insulted."

His anger relates to comments made two days ago by the EU's Justice Commissioner Viviane Reding, in which she said that the removal of the Roma reminded her of actions taken during World War II. 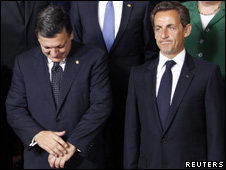 The French president described the words as "shameful" and "disrespectful. He said he would not allow his country to be the victim of "outrageous" insults.

He said none of Europe's leaders were prepared to accept such language. Chancellor Merkel had called him to express total solidarity," he said. "Everyone here," he later told a news conference, "was deeply shocked especially given our wartime history. These words were deeply wounding and were insulting to my fellow countrymen."

But afterwards a spokesman for Mr Barroso challenged Mr Sarkozy's version of events. "President Sarkozy," he said, "does have a case to answer. No one supports President Sarkozy on the substance of the issue. There was a huge row over lunch with President Barroso insisting he had a job to do upholding EU laws over the free movement of its peoples."

The EU will continue considering legal action against France. And President Sarkozy will continue dismantling the illegal camps. "We do not accept the existence of shanty-towns which are degrading to those live in them and nearby," he said. He promised that French laws would apply to all and would not target particular ethnic groups.

That has been the main charge of his critics. The head of the European Commission said again today that discrimination against ethnic minorities was "unacceptable."

Mr Barroso did say that he regretted some of the language used but implied that both Viviane Reding and the French president had made inappropriate remarks. This was a reference to a jibe by President Sarkozy who noted that Ms Reding came from Luxembourg and that he would have no objection to that country taking in the Roma.

So where now? The French believe that there is a real problem that has to be handled on a European basis and they are looking forward to proposals from the Commission.

Some say that a European strategy to help the Roma integrate into Romanian society and which was effectively enforced might enable President Sarkozy to say there was enough progress and to stop the expulsions.

But this was a deeply-felt and not a synthetic row. It pits an EU chief determined to fight for Europe's policing of its laws against a French president equally determined to uphold French law as he sees it. The free movement of people within the EU does not in his view entitle people to occupy territory illegally.

French government spokesmen are also hinting that this row "will only widen the gap between the French people and the European institutions".