Gaddafi and the Roman circus 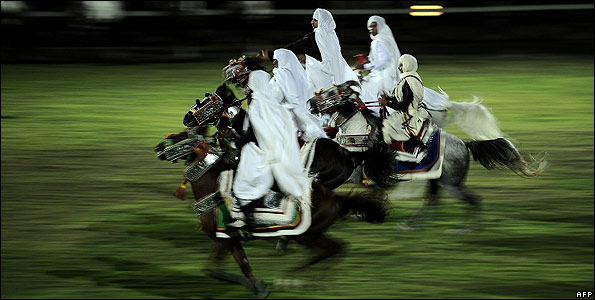 ROME A brief conversation in Rome. The man had been to a grand "spectacolo". There had been thoroughbreds, Berber riders, charging horses and flashing lances.

The ringmaster at the show was none other than the Libyan leader, Col Muammar Gaddafi. He has just left Italy after a whirlwind 48 hours that some say degenerated into a Roman circus.

The reason for the visit was to celebrate a friendship accord that had been signed between Italy and Libya in 2008. It was an important step in Libya and its leader coming in from the cold.

After the past few days some are having doubts about Italy's new-found friend. Most of the time Gaddafi and Silvio Berlusconi, two great politician-showmen, vied with each other for attention. There was Gaddafi out in Piazza Navona, downing a cappuccino and a gelato before buying a fistful of rings from African street-traders. Berlusconi hosted a dinner and told his guest "if you behave well I'll sing you a song". The Libyan leader left before the dessert, although the dinner went on until three in the morning.

None of that raised an eyebrow. But a modelling agency was hired to find several hundred young women to sit it on a Gaddafi lecture on Islam. They were paid between 70 and 80 euros to be there. Gaddafi told them "women are more respected in Libya than in the West and the United States". "Islam," he went on, "should be the religion of the whole of Europe". Three of them were apparently persuaded and converted.

Suddenly Italians began taking offence. One politician said that "Europe's Christians should retaliate. Gaddafi should not be allowed to come here and speak to us in this way". Another said this "Islamic drive" should be confined to Libya. Italy's Minister for Equal Opportunities, Mara Carfagna, was unusually silent. The Catholic Church was irritated and embarrassed, wondering whether they would get a crack at a similar audience in Tripoli.

Others felt Italy had been humiliated. Sure it values the commercial opportunities now opening up in Libya. It needs Libya's help in stemming the numbers of immigrants leaving Libya for Europe. But even on this subject the Libyan leader has left red faces. He suggested the European Union pay 5bn euros for his continued help in blocking illegal immigration, in order to, in his words, "avoid a black Europe". The European Commission was decidedly frosty at the suggestion.

The Libyan leader has led Libya for more than 40 years. He's in his late sixties; his radical past conveniently forgotten if not forgiven. But some in Italy now want Berlusconi to shake free from the Libyan embrace.