It is a desperate way to survive. In many European cities you can find women begging for money. Many of them are Roma. They squat on the Champs Elysees. They stand by the Brandenburg gate in Berlin or in the square at Alexanderplatz. Many carry children and some have cards asking for money. They sit on the stairs leading out of the metro station at Avenue Louise in Brussels. They crowd around the entrances to the Gare du Nord in Paris. 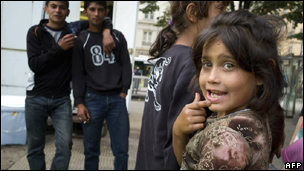 There is evidence that much of the begging is organised and controlled by men. The women are expected to bring in at least 50 euros a day. Some, like outside the Gare Du Nord, operate in groups of up to 15. The police believed that invalids and children, who are used to gain sympathy, are shared out between the groups.

It is the view of the French president that begging is part of a wider deeper problem involving some of the Roma. He believes that illegal Roma camps on the edge of French cities are a linked to serious crime. The Elysee Palace explained that the Roma camps were "sources of illegal trafficking, profoundly shocking living standards, the exploitation of children for begging, prostitution and crime."

Other countries have recently taken action against Roma groups. Demark has expelled some of them, so has Sweden. Germany has paid some to return to Bulgaria or Romania, where most of them originate from.

But it is the action taken in France that has caused most controversy. President Sarkozy has ordered the police to break up 300 illegal Roma camps, and there are plans - starting today - to deport 700 of them. The President also wants those of "foreign origin" who attempt to kill police or other officials to be stripped of their French nationality.

These moves were prompted by an incident in Grenoble. Shots were fired at police after a young man of North African origin was killed by police while trying to rob a casino. In a separate incident, Gypsies rioted after one of them was shot dead failing to stop at a checkpoint.

Mr Sarkozy's view is that "French nationality must be merited, and one must be able to show themselves worthy."

The Roma have a history of being persecuted. Many were killed by the Nazis. For centuries they have lived nomadically. There are thousands of Roma who are French citizens and have lived peacefully and lawfully in France for years. Many have full-time jobs and never beg. However, when Romania and Bulgaria joined the EU in 2007 the people gained the right to travel and to live in other European countries. Many Roma groups took advantage of that and there are estimated to be 15,000 of them in France. The French insist they have to apply for a work permit or they have to leave after three months.

Some have accused the French president of pandering to the far-right, of stigmatising a vulnerable group. One MP from the president's own party called the round-up "disgraceful" and compared it with what the Nazis did. However, the measures appear to be popular with the public and the president has seen his poll ratings edge up.

The secretary-general of Mr Sarkozy's party, Xavier Bertrand, said the actions were "a slap in the face" for the politically correct.

"As usual, 'Sarkozyism' is out of step with the elites but in step with society," said Interior Minister Brice Hortefeux.

Some of the Roma were leaving today. Those who went voluntarily have been given 300 euros and an airline ticket.

The EU guarantees "freedom of movement" but the legislation "expressly allows for restrictions on the right to move freely for reasons of public order, public security and public health".

The crackdowns are unlikely to be successful in the long-term. In their own countries many Roma cannot find work, and sooner or later they will return to Europe's wealthiest cities.

Years ago, the one-time dissident and Czech President Vaclav Havel said that the Gypsy problem was "a litmus test not of democracy, but of civil society". The challenge now is not just to countries like Hungary or the Czech Republic, but also to much of Europe.