The gap between Spain and Germany 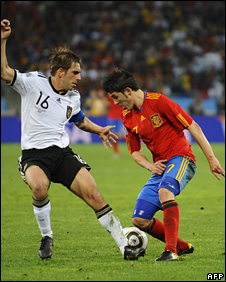 In the aftermath, the verdict. Spain, masters of possession. Germany squeezed out of the game. They had hoped to hurt the Spanish with fast counter-attacks but they couldn't. It was predicted Spain would play that way in the World Cup semi-final. They did and Germany could not counter it. It was a match that underlined the different tactics of two European sides.

Recently, a German newspaper trumpeted a new economic miracle. Industrial orders were 30% higher than a year before. For Mercedes Benz, June was the best month in its history, with orders up 13% on the previous year. Unemployment has fallen for 12 straight months. Growth this year could be 2.3%. Even its budget deficit looks as if it will be lower than expected, prompting its finance minister, Wolfgang Schaeuble, to call the news "delightful".

Germany is "big surplus" country, currently running at 5.5%. Even if the shine comes off some of these trends in the coming months the German motor is purring.

In Spain unemployment continues to edge up. It is close to 20% and is more than 40% for those aged between 16 and 24. The International Monetary Fund forecasts that Spain's economy will shrink this year by 0.4%. It is struggling to emerge from recession. Spain has a budget deficit of 10%.

In the private sector there is still huge debt, some of which may have to be written off. The Spanish good years were built on a housing boom. It was, for a time, the biggest creator of jobs in the EU. The burst bubble has left behind an injured coastline, 800,000 unsold homes, and companies burdened with debt.

These two countries share a single currency and inhabit the same monetary union. Spain would benefit from a looser monetary and fiscal policy. Germany would not.

For Spain there are two big questions: How will it grow again, and how will it become competitive again?

Firstly, there is the not insignificant fact that Spain is committed to reducing its deficit by 2013. Public sector wages have been reduced, some benefits are being scaled back and some investment programmes postponed. All of this, of course, may weaken growth.

Spain would like to generate growth from exports. The falling value of the euro helps a little but not nearly as much as for Germany, which has a far wider range of world-class products to export.

Spain would like to export to a booming Germany but growth there is driven more by exports than expanding domestic demand.

As was apparent from conversations earlier this week in Berlin, Germany will not reduce its current account surplus to help its neighbours. Politically it's a non-starter.

One of its problems has been its restrictive labour market. Many older people have jobs for life with extensive rights that makes it almost impossible to lay them off.

Many younger people are on temporary contracts with little job training, which prevents them learning the skills for high-quality jobs. There is a generational divide at the workplace.

The question remains unanswered as to who will provide quality jobs for the future.

The Spanish government has started making changes to its labour laws making it easier to hire and fire. Many employers say it does not go far enough. There is already resistance from unions, which will intensify in the autumn. The IMF has said Spain needs "far-reaching and comprehensive reforms".

So Spain is facing cuts and austerity at a time when it needs to re-engineer its society. Gradually people in Spain - like elsewhere - are realising that Europe won't be able to maintain its welfare state unless its economies grow faster than predicted.

The reality is that the differences between Germany and Spain are growing not narrowing.

Spain may have reason to celebrate on Sunday. It may taste success on the football pitch.

But its future is far less certain. Without far-reaching and unsettling reforms it faces a future of stagnation, marked by low growth and high unemployment.