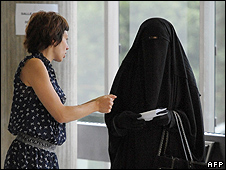 France moves closer to banning the full-face veil today when its parliament begins debating a law that would outlaw the wearing of the burqa or the niqab anywhere in public.

It is a measure that seems popular with the public. Polls suggest 70% back a ban.

The numbers that wear the full-face veil in France are tiny. Perhaps 2,000 and then the tourists from the Gulf, who like to shop in the luxury stores on the Champs Elysees.

The French government says this is not an argument about religion but about values. By adopting this legislation the French are insisting that those who live in France abide by their values. As the writers of the legislation say, hiding your face in public is "an offence to the nation's values". It violates the republican ideals of secularism and gender equality.

The French President, Nicolas Sarkozy, said it was "a sign of debasement". The Immigration Minister, Eric Besson, described the burqa as a "walking coffin".

The French Prime Minister, Francois Fillon, said Muslims who wear face coverings are "hijacking Islam" and provoking a "dark and sectarian image". That seems to go to the core of the complaint - that some new arrivals live in France but do not embrace French identity.

The moves to ban the burqa also reflect a changing attitude towards multiculturalism in much of Europe. For a period it was accepted that new groups would arrive and continue living much as they had done in their countries of origin. There was increasing concern, however, that this was leading towards separate, parallel communities.

Now the legislation will be voted on next week and then goes to the Senate. It is likely to be law by the beginning of next year.

Enforcing the new laws will be difficult. Men who force their wives to wear the full-face veil will face substantial fines. A woman risks a much lower fine of 150 euros (£130) because they are "often victims given no choice". Persistent offenders risk further fines and prison. All of these penalties will be difficult to enforce and there is every chance that a woman may choose to go to prison and become a martyr for her cause. It is also difficult to see police officers intercepting women from the Gulf on their shopping trips.

A woman driving in a niqab was recently stopped in Nantes and fined because the garment "blocked her lateral vision".

Some Muslims in France support a ban. Many argue that the burqa or niqab is not principally a statement about religion, but about culture and identity.

Others oppose wearing the full-face veil personally but believe legislation is unnecessary. "It's going to increase feelings of being ostracised in part of the Muslim community, even parts where women don't wear the niqab," said Jean Bauberot, a sociologist from Sorbonne University.

Amnesty International has said that a "total ban on covering the face would violate the right to freedom of expression". Almost certainly the legislation will be challenged in the French Constitutional Court.

Similar moves are taking place in other European countries.

In Belgium a bill banning the wearing of full veils is awaiting Senate approval.

Spain is examining similar legislation. In Barcelona, the mayor says he will ban the garment in the city. There is support for a ban in the Netherlands too.