The leaders who prefer not to lead 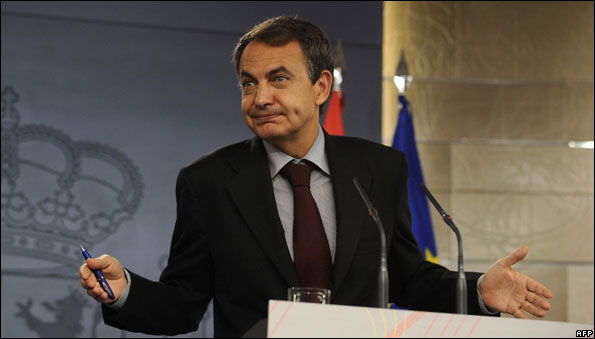 After a recent visit to see the Italian leader Silvio Berlusconi, the Spanish Prime Minister, Jose Luis Rodriguez Zapatero, said "economic activity is not a national, but a European affair". It sounded like a way of removing responsibility from his shoulders, as if the economy was no longer a matter for him.

The Spanish prime minister, however, has made a habit of allowing others to set his agenda. After weeks of watching Greece head towards bankruptcy, President Obama phoned the Spanish leader and demanded "resolute action" over the Spanish deficit. Sure enough, Mr Zapatero agreed to cut public sector wages by 5% and he announced 15bn euros (£13bn) of austerity measures. The week before he had said the economy did not require any "drastic adjustment".

Many voices pointed out that debt was only one element of the crisis in the euro. There was a lack of growth and a difference in competitiveness between countries like Spain and Germany. So the IMF said Spain "must reform its labour laws". It pointed out what every commentator knew - that the Spanish "labour market was not working". Now, with more than 40% of 16-25 year olds unemployed, it was not difficult to see that Spain needed to make it easier to hire and fire workers. Sure enough, after the IMF intervention, Mr Zapatero moved to reform Spanish labour laws.

For weeks now, rumours have circulated that there are problems in the Spanish banking system. On 17 June the Spanish Central Bank said it would release the results of "stress tests" on Spanish banks. Mr Zapatero has become an enthusiastic stress-tester.

In 2006, Spain started building more homes than the UK, France and Italy combined. That was the Spanish bubble that could have been reined in. Even the finance minister warned of the dangers of free-spending. The government could have turned off the spending tap but it chose not to.

A former Spanish Minister Jordi Sevilla made this observation: "The government made a real mistake in being late in recognising the crisis, and continues to make a mistake in the drip by drip measures to solve it."

Mr Zapatero has taken a stand against "machismo", but he gives the impression of being a pack politician who seeks the safety of the shoal. He likes the international embrace, where he can take cover in the EU or the G20.

There are other politicians who are always talking of global solutions and sometimes that is clearly the case. But as the American politician Thomas (Tip) O'Neill once famously said, "all politics is local".

That is the difficulty for the EU's leaders who are enforcing an age of austerity. The temptation is to say it's a European matter, with more and more decisions being taken at EU level - but the voters may not see it that way. An old instinct may kick in. Leaders are there to lead.