It is one of the scripts of European history. A weak and corrupt government. Widespread unemployment. A shrinking economy. Crime. A political party emerges. It offers certainty. Solutions. A cleansing. Crime to be "eradicated". Scapegoats identified. 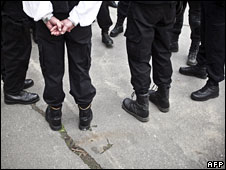 So with the rise of Jobbik in Hungary. In Sunday's elections the party came a strong third, winning almost 17% of the vote. Its popularity has been built on railing against what it calls "gypsy crime". The Roma, who make up between 6-7% of the population, are cast as thieves who top up their thieving with benefits.

As a party they draw on the language and images of the past.

They are linked to the Hungarian Guard, whose uniforms are reminiscent of a wartime pro-Nazi group.

They deny they are anti-Semitic and yet they speak of "foreign speculators" who control the country - a group that includes Israel. Supporters refer to Budapest as "Jewdapest".

In this climate a local rabbi says bumper stickers have appeared with the slogan "Jew-free car".

Hungary's largest Jewish organisation said Sunday's vote was "the first occasion that a movement pursuing openly anti-Semitic policies had taken a step to power since the Nazi era".

All of this is against a background in which politicians are held in low regard. Lies were told about the economy. In 2008 Hungary needed a bail-out from the International Monetary Fund. Last year the economy shrunk by 6.3%. Unemployment is more than 11% and in the areas where Jobbik scored well it is even higher.

Paul Tannis, a sociologist, says the "party has played on the country's sense of wounded pride to make Roma and Jews the scapegoats for everything that has gone wrong".

Across Europe there are concerns about identity, about changing societies. It is a climate in which far-right or anti-immigrant groups can do well.

The National Front in France put up a robust showing in recent elections. Geert Wilders's Freedom Party could do well in the forthcoming Dutch elections.

What has not happened in Europe is a breakthrough for these parties.

They reflect anxiety, disaffection, and alienation from mainstream society. In calling for a national debate on identity French President Nicolas Sarkozy recognised the potency of this mood and it thrives on the economic downturn.

And history, however long buried, lurks beneath the surface. In the current tension between Germany and Greece over a potential bail-out, a senior Greek politician quickly pointed out that Germany still owed money for what it had done during the war. The Germans were furious. Some suggested, whether frivolously or not, that they might buy a few islands if the Greeks were desperate for money.