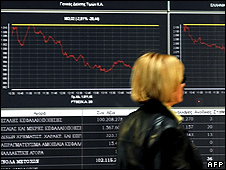 The fix was in. The deal done. Just a couple of weeks back Greece had been saved. The leaders of the eurozone countries had conjured up a rescue package if Greece needed it. The President of the European Commission, Jose Manuel Barroso, beamed at breakfast the following day. He expressed himself "a happy man".

Yet today Greece finds the costs of servicing its debt are even higher.

As I sat at breakfast that morning a thought nagged away at me. I could not think of a serious economist who did not believe the euro was a flawed currency. Even friends of the euro had shaken their heads; you couldn't have monetary union without fiscal union. The differences between countries within the zone were too great. Under the patina of European unity there could be no disguising that countries ran very different ships. There was a German way and, as some unkindly described it, "the Club Med way".

Now at the recent summit it was agreed to set up a task force to examine some of these fundamental problems, but much was left vague.

As had happened before in this crisis, there was an absence of detail even with the rescue package. When exactly would the EU step in to aid Greece ? What would be the terms of any loans? All eurozone countries would have to approve a loan and the Germans would therefore have a veto. Berlin appears to have a different timetable to others on when the rescue teams would be activated. That would only be when Greece actually fails to raise funds from the capital markets.

There is a pattern here. European officials make optimistic statements which are detail-lite. They believe, in effect, they can spin the financial markets. If investors believe Greece has solid backing from other countries then the cost of borrowing will subside and the crisis will ebb. But the market players are wary of what some see as the Brussels fudge factory. So they stress-test the product, which is what they were doing yesterday. And so the crisis continues.

Jean-Pierre Jouyet, who is head of France's financial markets, said "the markets are testing Europe, its organisational strength and its capacity to apply the rules of economic governance and its commitments made with regard to Greece".

Sometimes it is unclear whether the priority is to save a currency or to save the European project. Of course the two are entwined but much of the indecision and confusion of recent weeks lies in the uncertainty over the priorities of Europe's leaders.

Paul De Grauwe, an economist who advises President Barroso, said "this is no longer a financial issue. It is about politics and nationalism, and it is a real setback for those who believed in a united Europe."

If it was purely a financial issue Greece would have gone to the IMF weeks ago and its borrowing costs would have been slashed. Many of Europe's leaders would not countenance that because of pride. It would signal there was a weakness with the currency and it would sow a doubt as to where Europe was heading.

Much time and energy has been spent on ensuring there is European control of any rescue package.

The Greek agonies have also brought to the surface deeper questions. How do the euro's "flaws" get sorted out?

Some are suggesting that the answers lie in greater "economic governance" within the European Union in the future. It is a phrase that means different things to different people. Some see it as meaning the rigorous enforcement of existing rules. Others see it as paving the way for eventual "fiscal union".

That brings with it a problem. There is no evidence the people are for it. As Berlin has pointed out, there would be difficulties in running a single market where some countries are in a monetary and fiscal union and some are not.

The longer the crisis continues the more Germany is put under pressure to help resolve it. In the past appeals to European unity would have papered over the cracks. This time the German taxpayer has indicated an unwillingness to bail out the weak and, in their view, irresponsible. They want a strong, stable currency like the D-mark they gave up. If the choice is between the European ideal and a strong economy based on wage restraint and discipline then realism wins out.

Now if the euro was a company, the Greek division would be closed or sold off. The product line had not lived up to expectations. It was important therefore to protect the core business. Other weaker divisions might have to go too. Now some economists like Paul Krugman, who is an admirer of Europe, opined recently that the problem was that Greece had joined the Euro before it was ready. We are now living out the consequences of a fudge ten years ago.

The idea of a smaller, more stable eurozone is blasphemy to some, because the currency was a step towards the goal of political union. No major politician is talking of a smaller eurozone at the moment, although Angela Merkel has allowed for countries that persistently flout rules to be expelled.

But one of the hallmarks of this crisis, and in the approach towards Europe's sluggish growth, is that leaders sometimes seem torn between pragmatism and promoting further European integration.