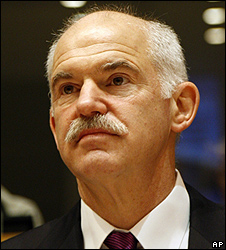 In recent weeks the Greek Prime Minister, George Papandreou, has had his game plan. It is to play the veiled threat. He wants the EU to offer his country a concrete rescue plan that can be rolled out if Greece needs it. His hope - shared by others - is that the mere existence of the plan will tame the markets and lower the costs of borrowing. But as he watches the Union struggle to find consensus he makes his threat: I might be forced to turn to the IMF.

What he has been counting on is European horror at such a move. It would be a humiliation for the whole European project, say some. It would signal to the world we can't manage our own currency, say others. It would lower Europe's prestige. Did not President Sarkozy say only recently "we cannot let a country fall that is in the eurozone. Otherwise there is no point in creating the euro." The Spanish, too, recoil at the thought of turning to the IMF, with the United States its largest shareholder.

The Greek leader sprinkles his threats with a beguiling appeal to lofty European ideals. "We are a family of values," he reminds his potential backers, and we should be showing the world "Europe can act together in a co-ordinated way".

Suddenly it appears he may have mis-read the game. Germany has changed its tune. To the threat "I'll go to the IMF" the German response seems to be "please, make my day".

The euro-crisis is throwing up some new truths. Germany will be unsentimental about its currency. At its birth there was a "no bail-out" clause and Germany has a constitutional court that may well uphold that.

As to the cry of supporting European ideals, there are few misty eyes in Germany. Angela Merkel will defend national interest first. That is the message emerging from Berlin.

To those who see an appeal to the IMF as damaging it is surely too late. There is scarcely an economist out there who has not pointed out the inherent difficulty in running a single currency where there is monetary and not fiscal union. And the differences between the economies that share the currency are there for all to see. In recent weeks the EU has shown it lacks the mechanism to handle a crisis like this. The difficulty was on display last Monday, when Jean-Claude Juncker, the head of the Eurogroup, said "we have clarified the modalities" - and everyone, including the markets, was none the wiser.

In truth many have felt from the outset that the IMF route was the least problematical. It is certainly the UK route. Leaving pride aside, the cost of servicing Greece's debts would halve.

So we move forward to next week's economic policy summit. The Greek crisis is likely to dominate again. The IMF, either on its own or in partnership with the EU, may begin to appear the best option in the short term.