The Euro: A bail out for Greece? 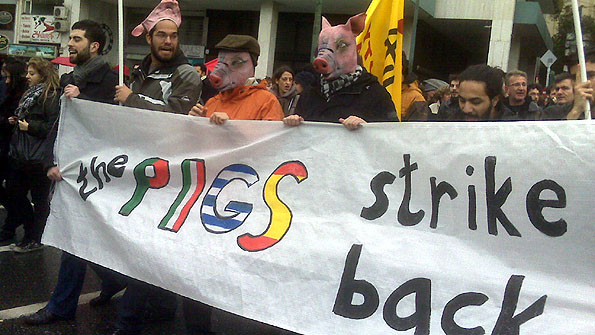 Greece will not ask for a bail-out. It can't do that, an economic adviser close to the Greek Prime Minister told me today, because such a request would undermine the credibility of its plan to reduce its deficit.

However, key advisers in Athens believe that you can't buck the markets, and that Greece needs to show it is backed up by a pool of money.

The markets are already factoring in that there will be a bail-out or rescue.
Intense discussions are going on involving European officials. They include Jean-Claude Juncker, the head of the Euro Group and Jean-Claude Trichet, the President of the European Central Bank. European finance ministers were holding emergency talks.

However, there have been conflicting voices during the day.  German officials were quoted as saying there was no urgent need for a bail-out and 'no decision on such help' is imminent. What is being looked at is whether Greece could have access to a line of funding that would reassure the markets.

The head of the National Assembly in France said 'the issue is not to let Greece go bankrupt.'

There are divisions between officials and countries on whether the International Monetary Fund is better placed to rescue Greece. Some European officials believe such an intervention would wound European pride.

Treasury officials in the UK say they do not expect Britain to contribute to any bail-out package. It is a matter for the eurozone, and not the UK.

However, Britain is willing to put up a large sum to support the IMF with its fund to help struggling economies.

What officials in Athens fear is that if there is now a delay in announcing a bail-out, the markets will turn once again on Greece.