Conspiracy and the euro 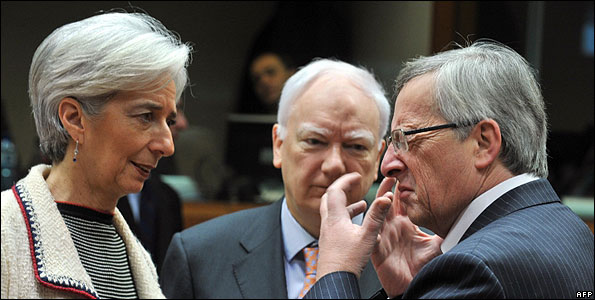 I have reported from many countries where crises are blamed on "foreign hands". More often than not they are unnamed. Indeed these sinister conspirators can have greater credibility if they remain in the shadows.

Sometimes the conspirator is identified. After the recent anti-government demonstrations in Iran, officials blamed British intelligence for stirring up the mob.

Now with the euro facing its severest test, some see conspiracy here too. The Greek Prime Minister, George Papandreou, when talking to his domestic audience, said that his country had become "a laboratory animal between Europe and the markets". The message to the Greek people is that speculators are to blame.

The cry has been taken up by the Spanish Public Works Minister, Jose Blanco. "None of what is happening in the world," he concludes, "including the editorials of foreign newspapers, is coincidental or innocent".

Spanish papers report that the country's National Intelligence Centre is looking into "speculative attacks on Spain". Thrown into this inquiry is "the aggressiveness of some Anglo-Saxon media".

As the conspiracy unfolds, the plotters emerge as "Anglo-Saxon" speculators. Some French commentators are drawn to this scenario. It's the Anglo-Saxon banks and hedge funds who are behind the euro crisis, is their conclusion. Indeed, one French commentator was quoted as saying "those who played against Greece will pay dearly. The European Union states now view this as direct aggression against them."

Even the head of the 16-nation Eurogroup, Jean-Claude Juncker, is drawn to the idea of the euro as victim. "We shouldn't accept to be the target of financial markets," he says. "I am concerned," he goes on, "at the irrational way of behaving of financial markets".

In the UK, Labour MP and former Europe Minister Denis MacShane writes that "the Anglo-Saxon club of anti-Europeans is on the rampage".

So the plot seems to be this: that some Anglo-Saxon "hedgies" are targeting the euro, egged on by a supporting cast of anti-European scribes.

So what do we know?

It is true that speculators have raised their bets against the euro. It is reported that the Chicago Mercantile Exchange, which reflects hedge fund activity, has witnessed growing positions being taken on the euro falling further. It is, however, what foreign currency trading is all about. As Charles Grant of the Centre for European Reform points out, "people take bets on currencies - if they overreach themselves they go bust".

Regardless of conspiracies, however, there are some real, fundamental problems. Firstly, the Greek accounts were exposed as fakes. When its deficit shot up, financial markets feared the huge public debt may cause it to default. That is not just a judgement by markets - senior officials in Greece believe that too. The Greek Finance Minister, George Papaconstantinou, admits his country is in "a terrible mess". Confidence in Greek accounting has not yet returned.

There is little faith either that the Greek government can implement its austerity plans. Only today Greek customs officials walked off the job for three days in protest at the spending cuts. Fuel truck drivers may join in. The message from the meeting of European finance ministers today was that Athens "must surpass expectations (in its spending cuts), and so far they have not done so".

Secondly, no one yet knows the details of how any bail-out would work. The uncertainty plays on market fears. Greece wants the EU to set out how any potential rescue would function. Several key countries including Germany don't yet want to show their hands. They are giving Greece until 16 March to show it is making progress with its austerity plan. If it isn't, they may insist on Athens taking harsher measures, including raising VAT.

It is worth noting that the IMF will have a strong and possibly growing role in monitoring and advising the Greeks on their plans.

Thirdly, Germany is willing to play the longer game because politically any bail-out would be very difficult to sell at home. The German people don't want it. Charles Grant says, however, he is certain that in the end Germany would act to prevent Greece defaulting. After all, it has signed up to a statement to "defend the stability of the euro". He says it is "understandable" at this stage that Germany wouldn't want to be too "explicit" about its plans, but who exactly will do the bail-out remains unclear.

Fourthly, there are the imbalances between the countries in the eurozone. They cannot be wished away. Germany, for instance, has a tight wage policy. It relies on exports for growth and does well out of the eurozone. But Southern European countries can't export their way out of recession when domestic demand in places like Germany remains so weak. And it is highly unlikely that Berlin will loosen its policies to save the Greeks.

Fifthly, there are widespread doubts among those who support the euro that it can survive in its present form whilst fiscal policies are decided at the level of national governments.

So as Nicolas Veron of the Bruegel Institute says "the markets are testing the limits of the single currency policy framework".

So conspiracy? The markets are giving the euro a severe stress test because they suspect there are real flaws and uncertainties that have not been addressed.

The respected economist Paul Krugman had a take on all this today: "The real story behind Europe's troubles lies not in the deficit but in the policy elites, who pushed the Continent into adopting a single currency well before the Continent was ready for such an experiment."