The enigma of Berlusconi 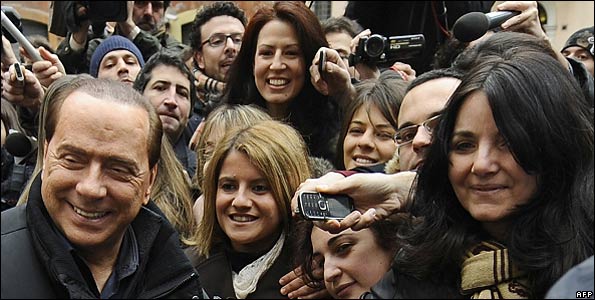 ROME The Italian prime minister returned to work this week. He arrived in Rome full of smiles, his face miraculously restored after he was attacked in Milan by a man who threw a replica of a cathedral at him. He touched his left cheek and told reporters, with obvious pride, that there was hardly any scar visible.

His friends tell me he is in excellent spirits. He quipped that "replicas are so cheap these days they throw them at you". His popularity seems to have been restored, although more polls are due. Those close to him claim his ratings are better than the American president's.

Plenty of Italians would shake their heads at that. They say that the prime minister has shamed their country, that he mocks the courts, that he has undermined democracy with his control of large sections of the media.

Then there is the view from abroad. He is Europe's best-known politician; known for gaffes, scandals, inappropriate remarks, alleged nights with escort girls, accusations of Mafia connections. And even this week he faces another trial while he seeks immunity from prosecution. Without doubt, in many countries, this cocktail of problems would have swept him from power.

I have spent the past two days talking to those who write about him and those who are close to him. I always ask, in these early days of 2010, whether he'll survive. Almost no one thinks he'll be forced from power.

So, the enigma of Berlusconi.

One key to his survival is his personal narrative. "He knows very well the guts of the country," said Massimo Franco, a political columnist for Corriere della Sera. Even with his immense financial power he manages to portray himself as belonging to ordinary people. Many like the fact that he is self-made, a devoted football fan, a man who breaks rules and gets away with it, a man who loves and flaunts beautiful women. Friends of his say that ten days ago, when he appeared in a Milan supermarket, he was mobbed with people shouting that they loved him. It is difficult to find out exactly what happened, but he retains a strong current of affection.

Silvio Berlusconi is very good at turning every disadvantage into an advantage. The attack in Milan confirmed, for many, his narrative that he is a victim of a hate campaign. Certainly some of the criticism has been toned down. Massimo Franco believes that Berlusconi has been able to give almost a religious dimension to his suffering. After the attack he offered his bloody face to the people. He offers forgiveness to his attacker. He calls for hate to be removed from public debate.

The Italian leader has been able to link the prosecutors, who accuse him of corruption and tax fraud, with the so-called hate campaign. The prosecutors, he said only this week, are worse than the mentally unstable man who attacked him.

Berlusconi thrives on adversity. He relishes the political battle. "He is a fighter", says Carlo Rossella, an old friend. "He never gives up. He is very shrewd." It is not in his character to stand down or to be shamed into stepping aside.

"People you couldn't imagine vote for him but are too embarrassed to admit it," one analyst told me. Italy at the moment is a centre-right country. Berlusconi has a vision that still appeals; individual freedom, economic freedom and anti-communism. Massimo Franco said that at the end of the Cold War Berlusconi understood that Italian politics needed to be redefined. He has built a party around himself.

Last year Italy suffered a 5% drop in GDP. Unemployment amongst young people is running at 27%. Silvio Berlusconi has said there is no chance of cutting taxes in the immediate future. The opposition has accused him of lying to the voters, but they have not been able to offer a convincing alternative to solving the economic crisis.

As regards the downturn, the Italians have their own way of surviving. They are a nation of savers. They have strong family networks. The black economy thrives and accounts for 20% of GDP. Of those who own their own homes 85% have no mortgages.

"Well, I'm not a saint," was the Italian leader's response to revelations about his parties. Time and again people will tell you "his personal life is not our problem". Italians seem reluctant to become involved in the private affairs of others. They enjoy the gossip, but most prefer not to judge.

Some do say that his media empire has promoted a TV world built around scantily-dressed showgirls. Some have even been offered seats in the European
Parliament. There is growing opposition from women's groups, who say the culture is demeaning to women, but some say the entertainment culture has helped sustain him in office.

Those close to him talk insist that he is a player on the world stage. They talk about his close relationship with the Russian Prime Minister, Vladimir Putin. They say that with the United States he is the reliable ally. After President Obama had announced the surge in Afghanistan it was Berlusconi who committed the most extra forces. Recently he moved quickly to accept body scanners. His critics say, however, that there is little substance to the idea that he is a key mediator between the Russians and the Americans. Others say that Chancellor Merkel, for one, has no interest in being close to Berlusconi.

One of the keys to Berlusconi's survival is the opposition. It remains divided and cannot coalesce around a credible opponent. They have not been able to take advantage of Berlusconi's mistakes. One opposition MP says there is little they can do, as Berlusconi is " the centre of a massive propaganda machine". Even so, they have failed to find a political vision and a narrative to match that of the Italian leader. And so he survives. His greatest danger would be if his own coalition fell apart.