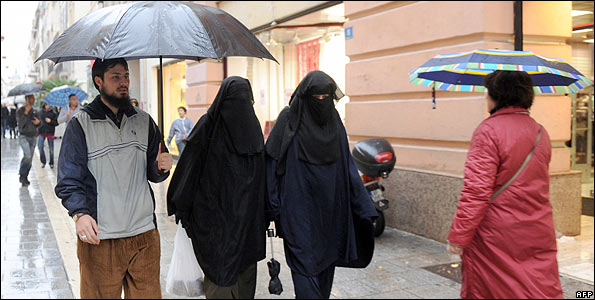 For several months a parliamentary commission in France has been investigating whether the burka or the niqab (the full veil) should be banned. They are due to report next Tuesday, 26 January. It is now clear that they will say that the burka "should be prohibited on the territory of the Republic".

In an interview with today's Le Figaro, the president of the commission, Andre Gerin, said that "the ban on the burka will be absolute" in public places.

Now this will have the force of an opinion, but it will be the first step towards putting a law in place. A great many deputies in the parliament clearly want this to be followed by a law. Nothing will happen quickly and certainly not before the French regional elections in March. There will also be an intense debate as to what the legislation should include and how to avoid it clashing with human rights laws.

I spoke with Jean-Francois Cope, the head of the parliamentary group for the UMP (the governing party) and he said that this was mostly about women's rights. "We think in our country", he told me, "that the face is a way of recognising and respecting each other". The veil, he went on, isn't the point. It is the covering of the face that we object to.

Now Mr Cope has already talked of fining those who break the law. Others like Xavier Bertrand have gone further in suggesting niqab wearers should not acquire French nationality. In his view the full veil is "simply a prison for women who wear it".

The deputies, who support the ban, say that many Muslims confirm that nothing in Islam requires women to wear the full veil. Only about 1900 women in France wear it.

It is difficult to isolate where this push for banning the burka comes from. Mr Cope said it had the support of 74% of French people. What people say is that as Muslims have become more visible across Europe, there is a concern that they are pushing a separate identity that would lead to parallel, not integrated, communities.

One academic I spoke to said that liberals had not expected, in backing multiculturalism, that newcomers would arrive and live apart from the society they had joined. President Sarkozy has spoken of "this feeling of sharing less and less a common culture, a common imagination and a common morality". In his view, becoming French means "adhering to a form of civilisation, values and behaviour".

Tomorrow I will write on the view from behind the niqab and how women who wear it may react to legislation if it comes.